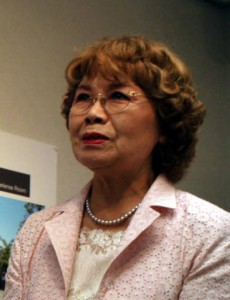 “This same tragedy must never be repeated.” The fervant desire of the atomic bomb survivors, who have endured lives of suffering, has at last been fulfilled in the form of the Treaty on the Prohibition of Nuclear Weapons, which was adopted at the United Nations in July. However, whether or not this treaty can be effective is not yet known because the nuclear nations and non-nuclear nations remain divided over the agreement. This year, Hiroshima commemorated the 72nd anniversary of the atomic bombing on August 6, the first anniversary since the nuclear weapons ban treaty was established. At the same time many in Hiroshima made calls for further efforts to bridge this divide over the treaty, there were some, of younger generations, who vowed to help convey the message of the aging A-bomb survivors. A mix of hope and frustration toward nuclear abolition was felt in the A-bombed city.

Two sisters from Akiota Junior High School, Airi Shono, 14, a third-year student, and Kaho Shono, 13, a second-year student, visited the ruins of the Chugoku Military District Headquarters (the former air defense operations room) located on the grounds of Hiroshima Castle, where they first met Yoshie Oka two summers ago. Ms. Oka, who died last May at the age of 86, was the first person to transmit the news of Hiroshima’s destruction to the outside world on August 6, 1945. Ms. Oka encouraged the two girls by saying, “You are the last generation who can hear the A-bomb accounts in person. I’m counting on you.” Standing where they first heard her A-bomb account, Airi and Kaho mourned the death of Ms. Oka and pledged to pass on her message to future generations.

Looking back on Ms. Oka’s story, the sisters said, “We can never forget the scene Ms. Oka described, where she blacked out when the A-bomb blast exploded through the window. That’s so frightening.”

Ms. Oka shared her experience calmly, but with deep feeling, at the former headquarters building, which the sisters were able to enter. Her story left a strong impression on the two girls: Ms. Oka relating the first news of the annihilation of Hiroshima to a military unit in the city of Fukuyama, from the operations room where she had been mobilized to help with the war effort; her heart aching for the many classmates who lost their lives that day.

On the day they returned to visit the site, Airi and Kaho happened to meet Misako Kurata, 86, a resident of Naka Ward, on the castle grounds. It turns out that Ms. Kurata was a classmate of Ms. Oka and she was working with her in the operations room at the time of the atomic bombing. Ms. Kurata showed them the ruins of the lodgings where the students mobilized from Hijiyama Girls’ High School, including Ms. Oka and Ms. Kurata, had been staying. The sisters, hoping to hear more A-bomb accounts, were grateful for the fortuitous encounter with Ms. Kurata, as if it had been arranged by the late Ms. Oka.

Airi and Kaho have a relative on their father’s side who devoted himself to the peace movement and to research on the A-bomb damages. Naomi Shono, was a professor emeritus at Hiroshima Jogakuin University who died in 2012 at the age of 86. When the sisters heard about Mr. Shono’s activities, their interest in learning about the A-bomb attack grew. Thanks to their grandmother, who was a friend of Ms. Oka, the sisters were given the chance to hear Ms. Oka’s A-bomb account, for the first time, in August 2015.

Airi and Kaho then visited Ms. Oka in the hospital last March. They told her that they would like to hear about her experience once more. Ms. Oka replied, “We’ll see each other again.” But that was the last conversation they had. Airi said, “Ms. Oka kept up her efforts to share her A-bomb account for around 30 years, despite losing her husband and her oldest son. I was moved by the way she lived.” Kaho added, “Ms. Oka taught me to live with a strong spirit.”

The sisters wrote a letter of appreciation to Ms. Oka, in heaven, before they paid their return visit to the former military headquarters. In the letter, Airi told Ms. Oka that her dream is to be a teacher. She hopes to one day use her voice to talk about Ms. Oka’s life and hand down her A-bomb experience to future generations. It seems Ms. Oka’s encouragement has given them a gentle push in this direction.