The Key to a World without Nuclear Weapons: What course will Japan take on nuclear weapons ban treaty? 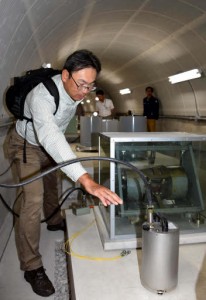 The Japanese government has rebuffed the idea of joining the Treaty on the Prohibition of Nuclear Weapons and will instead hold to its course of pursuing nuclear disarmament in phased steps while continuing to rely on the U.S. nuclear umbrella for the nation’s security. On September 20, nations can begin to sign the treaty in order to bring the agreement into force. Is there a path that will enable Japan to join the treaty, as the only nation to have suffered nuclear attack, while addressing the nuclear and missiles threats posed by North Korea?

Japan’s stance on CTBT, a pillar of nuclear disarmament

The drive from JR Nagano Station to the Japan Meteorological Agency’s seismological observatory in Matsushiro, Nagano Prefecture, takes about 40 minutes. At the edge of the tunnel-like extension at the foot of the mountain, the observatory has placed a seismometer, which serves as a seismic monitoring system of the Comprehensive Nuclear Test Ban Treaty (CTBT). The seismometer is installed about 60 meters underground and is able to measure tremors in the earth. This data is then sent to the Comprehensive Nuclear Test Ban Treaty Organization (CTBTO), located in Vienna, Austria.

“Like other facilities, the Matsushiro observatory also observed the amplitude of seismic waves, which were larger than those of the previous nuclear test by North Korea,” said Takayuki Otsu, chief of the observatory from the Japan Weather Association, which is under the auspices of the Japan Meteorological Agency. He was explaining the difference in scale between the sixth nuclear test that North Korea conducted on September 3 and the previous tests it has performed. The CTBTO analyzed that the magnitude of the tremor caused by the latest test was 6.1. The Japanese government has estimated the explosive yield of the test to be about 160 kilotons, which is ten times greater than that of the atomic bomb dropped on Hiroshima.

Twenty-one years have passed since the CTBT, the treaty that bans nuclear tests which produce an explosion, was adopted at the General Assembly of the United Nations. Since then, monitoring facilities for the CTBT have been established in 302 locations around the world, and the Matsushiro observatory is one of these facilities. The Japanese government has worked to promote the CTBT as a pillar of nuclear disarmament and non-proliferation, and contributed around 290 million yen to the CTBTO in the last fiscal year, taking into account the goal of strengthening surveillance of North Korea’s activities. To date, the government has invited 185 trainees from 70 nations to undergo seismological observation in order to develop human resources to maintain this global monitoring effort.

However, the government’s hopes for “constraining the development and qualitative improvement of nuclear weapons,” as the preamble of CTBT stipulates, suppressing nuclear development activities and improving the monitoring system have not been achieved. The CTBT has yet to enter into force because some nations, including the United States and China, have not ratified it. In addition, North Korea, which hasn’t signed the CTBT, has pushed ahead with a series of six nuclear tests. The United States is also maintaining and upgrading its nuclear arsenal by carrying out subcritical nuclear tests, which don’t produce an explosion.

Japan has promoted such efforts as an early start to negotiations to establish the Fissile Material Cut-off Treaty (FMCT) and the introduction of a common form to report on nuclear arsenals. These efforts are steps that can help advance the goal of a world without nuclear weapons. However, progress in these areas is slow because of opposition from the nuclear powers. With the attitude of the nuclear weapon states seemingly counter to the global trend of nuclear disarmament, the non-nuclear nations felt a rising desire to move forward with establishing the nuclear weapons ban treaty.

Kazakhstan, the nation that serves as co-chair with Japan to encourage other nations to sign and ratify the CTBT, took part in the negotiations to establish the nuclear weapons ban treaty and backed its adoption. Meanwhile, the Japanese government was consistently opposed to the treaty from the very start of the negotiations, arguing that such an agreement would deepen the divide between the nuclear nations and the non-nuclear nations. When the Japan-United States Security Consultative Committee (Two plus two) took place in August after the treaty was adopted, Japan requested that the United States take action to ratify the CTBT, yet the continuance of the U.S. nuclear umbrella was confirmed at this committee meeting, too.

One official from the Ministry of Foreign Affairs said, “The nuclear weapons ban treaty isn’t aligned with Japan’s security policy.” The treaty bans the use of nuclear weapons, the threat of using these weapons, as well as support or encouragement to others seeking to engage in such activities. The committee meeting again highlighted Japan’s contradictory approach, which involves calling for the abolition of nuclear weapons while continuing to rely on the U.S. nuclear umbrella.

Once the nuclear weapons ban is signed by the participating nations and enters into force, without Japan’s signature, Japan may be invited to the Conference of the Parties as an observer. If Japan then participates in that capacity, there is the possibility that the representative of the Japanese government will be swayed to understand the need to ban nuclear weapons on the grounds of their inhumane nature, as demonstrated by the suffering of the A-bomb survivors.

Comprehensive Nuclear Test Ban Treaty (CTBT)
This treaty bans any kind of nuclear test that produces a nuclear explosion. It was adopted at the U.N. General Assembly in 1996, and is, at present, signed by 183 nations (including Japan), and ratified by 166 nations (including Japan). In order for the CTBT to enter into force, it must be ratified by 44 nations which possess nuclear reactors for research and power generation, but North Korea, India, and Pakistan have not signed the agreement yet and the United States, China, Egypt, Iran, and Israel have not ratified it. The CTBT stipulates the International Monitoring System (IMS) consisting of 302 observation facilities to detect nuclear tests through seismic data, radioactive nuclides, hydro-acoustic date, and infrasound data. Japan has 10 observation facilities including the observatory in Matsushiro, Nagano Prefecture. However, some of the elements specified in the CTBT, such as the on-site inspection (OSI) to investigate cases of suspected nuclear tests, are not able to fully operate until the treaty goes into effect.

Fissile Material Cut-off Treaty (FMCT)
This treaty is designed to ban the production of certain materials such as highly enriched uranium and weapons-grade plutonium, which can be used for developing nuclear weapons. Though its goal is to restrain the development of nuclear arms, the negotiations to establish this agreement are stuck at an impasse.

Path to joining the treaty by establishing a nuclear-free zone

Japan continues to rely on the deterrence of the U.S. nuclear arsenal to maintain its security. While the Japanese government has expressed opposition to the nuclear weapons ban treaty, which was established under the leadership of non-nuclear nations, the government has also pursued many policies that are aligned with the contents of the treaty, when such policies are examined in detail. Akira Kawasaki, an executive committee member of Peace Boat, a Tokyo-based NGO, said, “I think Japan would be able to participate in the treaty, even while maintaining its military alliance with the U.S., if it made the decision and declaration not to assist, promote, or encourage the use of nuclear weapons, or the threat of their use, in all cases.”

In Mr. Kawasaki’s opinion, such a declaration would be seen as a withdrawal from the nuclear umbrella. He added, “Some people argue that Japan cannot request that the United States use specific weapon systems to protect Japan. However, the Japanese government, in representing the A-bombed nation, has to say that nuclear weapons are unacceptable, which will help prevent a nuclear war from breaking out.”

Toward this end, legislating the three non-nuclear principles is an important step. Although these principles have become a national credo, legislation is required because some supporters of the nuclear umbrella have advocated the idea of “2.5 non-nuclear principles,” which would allow transit and port calls of U.S. vessels carrying nuclear weapons. In addition, some members of the ruling Liberal Democratic Party argue for the start of discussion about bringing nuclear weapons from the United States and deploying them in Japan, partly in response to North Korea’s nuclear test.

Meanwhile, Hiromichi Umebayashi, a special advisor of Peace Depot, a non-profit organization (NPO) based in Yokohama, has proposed that Japan leave the U.S. nuclear umbrella by establishing a nuclear-weapons-free zone in Northeast Asia so it could create an environment for participating in the nuclear weapons ban treaty. This concept would stipulate that Japan, South Korea, and North Korea, the three nations in this region, not possess nuclear weapons, and that the three neighboring nuclear powers, namely the United States, Russia, and China, would not use nuclear weapons in this region, either. Last year, as one of the conditions for beginning a dialogue to denuclearize the Korean Peninsula, North Korea requested that the United States commit to not pursuing, or threatening to pursue, a nuclear attack against it.

Nuclear Non-proliferation Treaty (NPT)
The NPT entered into force in 1970, and includes about 190 nations including Japan, which ratified it in 1976. While the treaty permits the possession of nuclear weapons by the United States, Russia, the United Kingdom, France, and China, it obligates them to promote the goal of nuclear disarmament. The treaty bans nations other than these five countries from obtaining nuclear arms. Israel, India, and Pakistan, nations that are de facto nuclear states, have not joined the NPT. North Korea declared its withdrawal from the NPT in 2003.

Japan renounced war in Article 9 of the Constitution after World War II ended. It then signed and ratified the treaties that ban biological weapons and chemical weapons, both of which are weapons of mass destruction, like nuclear weapons, as well as the Landmine Ban Treaty and the Convention on Cluster Munitions, which it signed on the first day these treaties opened for signatures. If Japan doesn’t sign the nuclear weapons ban treaty, its standing, as the nation that has experienced the inhumanity of nuclear weapons first-hand and has since called for their elimination, will inevitably decline.

When the Landmine Ban Treaty was adopted in 1997, both the Japanese Ministry of Foreign Affairs and Defense Agency were at first hesitant to sign it because some nations like China, a major producer of landmines, did not intend to join the treaty, and there was also the view that landmines would be needed for Japan’s defense, since the nation has long coastlines. The United States, which had stockpiled a vast number of landmines, didn’t sign the treaty, either.

However, Keizo Obuchi, who was then prime minister, shifted this stance and promoted the idea of signing the treaty. Mr. Obuchi reportedly received a petition from Cambodian victims who had lost their legs due to landmine explosions and were calling for their abolition. After a series of negotiations with the United States, Japan finally signed and ratified the treeaty. By 2003, about a million landmines held by the Self-Defense Force were discarded.

In the case of the Convention on Cluster Munitions, which followed, government officials were reluctant to sign it at first. They thought that the treaty wouldn’t be effective because the major nations that possessed cluster munitions hadn’t joined it, given the fact that the United States was absent from the negotiations. However, with bipartisan support from lawmakers and NGOs, Yasuo Fukuda, who was then prime minister, became resolved to join the treaty. About 14,000 cluster munitions were discarded by 2015, and efforts by the Japanese government to assist victims of cluster munitions were then pursued as well, along with activities to support landmine victims.