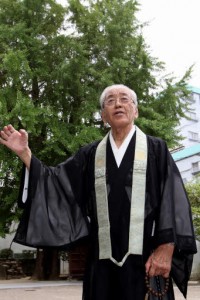 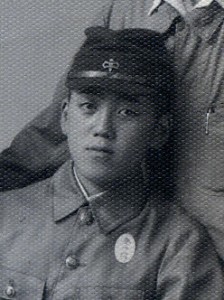 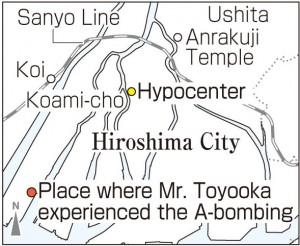 Overcoming bitterness of brother’s death to appeal for peace

“It was too sad and terrible to remember. So I kept quiet and I didn’t say anything about it for around 50 years since it happened,” said Koji Toyooka, 87, the former head priest of Anrakuji Temple, a temple in the Honganji sect of Jodo Shinshu, a school of Buddhism, which is located in Higashi Ward, Hiroshima. Even now, Mr. Toyooka is unable to bring himself to enter the Peace Memorial Museum. Still, he finally began sharing his experience of the atomic bombing, as an A-bomb survivor as well as a family member of an A-bomb victim, because he doesn’t want this tragedy to ever be repeated.

Back then, there were five children in his family: his three elder sisters, Mr. Toyooka, and Junji, his younger brother, who was 12 years old. Mr. Toyooka was a fourth-year student at Sotoku Junior High School (now Sotoku High School). Because of the war, nearly all his classes were canceled and, instead, he was mobilized to work at a factory, located about four kilometers from the hypocenter, where he cut iron for the war effort.

On the morning of August 6, Mr. Toyooka went to the plant as usual. When he thought he glimpsed a too-bright sun outside, in the next instant he was engulfed in a cloud of dust. He then left the building and saw the huge mushroom cloud rising into the sky. His supervisor told him to go home because something terrible had happened in Hiroshima. His work day at the factory was canceled.

As he made his way home, he barely managed to get past the flaming houses in the city. Black rain fell near Koi Station (now part of Nishi Ward) and he was soaked to the skin. He followed the tracks of the national railway (now Japan Railway) and was finally able to arrive home, at Anrakuji Temple, located about 2.1 kilometers from the hypocenter. The main hall of the temple was badly damaged.

Junji, who was a first-year student at Hiroshima Municipal Junior High School, didn’t return home. That day he had been mobilized to help tear down houses to create a firebreak at Koami-cho (now part of Naka Ward), near the hypocenter. Looking for Junji, Mr. Toyooka and his mother Ayako, who was 46 at the time, roamed the roads glutted with the wounded, who begged for water, and the dead lying on the ground. But powerful hot winds, from the raging fires, stymied their search. That evening they found Junji at a neighbor’s house, but he had been badly burned and couldn’t be recognized by looking at his face.

Junji must have been desperate to get back home. When Mr. Toyooka led him, Junji murmured, half-unconscious, “How much farther is it?” Mr. Toyooka could only encourage him on, saying, “Just another meter. You can do it!” After Junji made it home, the members of his family gathered around his bed and chanted Buddhist sutras. As they chanted, he murmured, “Thank you,” his last words. He died on August 12.

Their father, Kaio Toyooka, who was 49 at the time, made a coffin for Junji out of boards from the ceiling, which collapsed in the atomic bombing. The Toyooka family then cremated Junji’s body at Ushita Park near their home. Mr. Toyooka said, “I never dreamed I would have to cremate my younger brother with my own hands. I couldn’t stop crying.” More than 500 mobilized students from Sotoku Junior High School, who were younger than Mr. Toyooka, lost their lives in the bombing. By the end of 1945, 728 followers of Anrakuji Temple were dead, too. “Even now, it’s unbearable for me to think about how my friends and acquaintances died,” he said. So he walled off his memories of the atomic bombing.

His feelings began to change in 1994, when the Buddhist ritual of the 50th anniversary of Junji’s death was held. When Mr. Toyooka visited Thailand as a participant in a peace exchange program organized by the Hiroshima Japan-Thailand Friendship Association, he shared his A-bomb experience for the first time, including his exposure to the black rain, because he felt he couldn’t turn down the request. Then, when one of the audience members conveyed compassion for him, asking about his health since the bombing, he was very moved.

After losing his beloved brother, Mr. Toyooka felt great bitterness toward the United States and was determined to seek revenge. But as a university student, he learned about Buddhism and came to believe that the basis of peace was showing mutual respect. He also felt that Japan had taken the wrong path in going to war. Since 1998, he has shared his A-bomb experience with elementary school students who visit the temple’s main hall and he preaches the importance of a peaceful world.

This year, his experience was conveyed to the world in a way he had not expected. Part of his story was included in the Peace Declaration read out by Hiroshima Mayor Kazumi Matsui at the Peace Memorial Ceremony on August 6. He had written and submitted it to the Hiroshima City Office three years ago, after the city asked survivors to set down and send in their A-bomb accounts. In the declaration were his words: “To know the blessing of being alive, to treat everyone with compassion, love, and respect. Are these not steps to world peace?” He hopes that his words have had a positive impact on many people.

Tragic experience must be handed down
When Junji was found, his face was so badly burned that he could only be recognized by the buckle on his belt. He was in the same grade in school as I am now. I wonder how much he suffered. He died six days after the atomic bombing, and Mr. Toyooka told us that he and his family cremated Junji’s body on their own. If I were Mr. Toyooka, I would have been too sad to take part. I want to help hand down the A-bomb experiences of Mr. Toyooka and other survivors to future generations. (Hitoha Katsura, 13)

His words come from so much suffering
Mr. Toyooka told us that after Junji died, he wanted to strike back at the United States and avenge his brother’s death. However, after the war, his feelings changed and his desire for peace grew stronger. I’m sure it wasn’t easy to overcome the bitterness he once felt. Mr. Toyooka said that when we have a peaceful mind, we can help create a peaceful world. I want to take his words to heart, which he gained after experiencing so much suffering. (Hiromi Ueoka, 16)