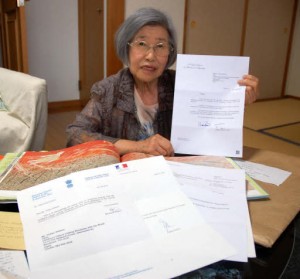 A Hiroshima-based citizens’ group, called “The Children’s Library Linking Hiroshima and the World,” has been sending a picture book that depicts the horror of the atomic bombing to places around the world. Over the past year it has received a growing number of letters in response to these books. Recently, it received a letter from an aide to French President Emmanuel Macron.

The group has been sending copies of the English translation of Hiroshima, A Tragedy Never to Be Repeated to schools in nations abroad as well as high-profile figures in the nuclear weapon states. The book, written by Masamoto Nasu, illustrated by Shigeo Nishimura, and published by Fukuinkan Shoten, shows the terrifying devastation caused by the atomic bombing.

The group mailed a copy of the book to Mr. Macron, via the French Embassy in Tokyo, when he became president this past May. His top aide in Paris responded by saying that Mr. Macron has given careful thought to the message conveyed by the group’s efforts. Sachiko Shibata, 85, the leader of the group, commented, “I don’t think they will easily abandon their nuclear weapons, but this could be a small step forward.”

The volunteer group, which is supported by subsidies and donations, has sent 2,500 books to 160 countries over the past 20 years. In 2015, they received an encouraging letter from Caroline Kennedy, who was then the U.S. ambassador to Japan. She said, “I look forward to sharing this book with my colleagues at the embassy.”

The group sent copies of Hiroshima, A Tragedy Never to Be Repeated to the participants of the G7 meeting of foreign ministers when it was held in Hiroshima in April 2016. They received letters from U.S. Secretary of State John Kerry and the aide to French Foreign Minister Jean-Marc Ayrault. After the G7 summit (Ise Shima summit), they received a letter from the secretary to German Chancellor Angela Merkel.

But the group does not always receive responses. It has not gotten a response from Barack Obama, the former U.S. president, or his wife Michelle Obama. They sent a copy of the book to Donald Trump before he began serving as president, but have not received a response from him, either. They also tried to send a copy to Ivanka Trump, an adviser to President Trump, but the U.S. Embassy in Tokyo refused to accept the book for reasons that are unknown.

Whether or not the books are actually being seen by the intended recipients cannot be determined. But Ms. Shibata said, “Picture books can help people overcome the language barrier and understand one another. We will persevere and keep up our steady efforts.”