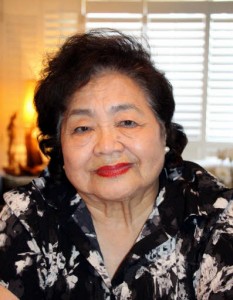 Prior to the award ceremony on December 10 for the Nobel Peace Prize, which will be presented to the International Campaign to Abolish Nuclear Weapons (ICAN), a non-governmental organization (NGO), A-bomb survivor Setsuko Thurlow shared her thoughts with the Chugoku Shimbun. Ms. Thurlow, 85, was born in Hiroshima and now lives in Toronto, Canada. She will accept, with Beatrice Fihn, ICAN’s executive director, the Peace Prize and will jointly deliver the Nobel Lecture.

Ms. Thurlow has worked together with ICAN since the organization was launched in 2007, and has made a pivotal contribution toward shaping international public opinion by speaking about her A-bomb experience at this year’s U.N. negotiations to establish the nuclear weapons ban treaty and at various other international conferences aimed at highlighting the inhumane nature of nuclear weapons.

At last, the Treaty on the Prohibition of Nuclear Weapons was established and the International Campaign to Abolish Nuclear Weapons (ICAN), an international non-governmental organization (NGO) that made innovative efforts to help establish the treaty, was subsequently awarded the Nobel Peace Prize for 2017. This prize, though, is an award which acknowledges the work undertaken by all the individuals and organizations, including the A-bomb victims and survivors of Hiroshima and Nagasaki, that have exerted tremendous efforts over the years to advance the abolition of nuclear weapons. At the invitation of ICAN, I will take the stage at the award presentation ceremony, which I feel is an tremendous honor.

ICAN was established in Australia in 2007 primarily by a group of anti-nuclear doctors and youth who were horrified by the enormous damage inflicted on the aboriginal people living near a British test site, and who took action against these tests. ICAN was also launched in Canada that same year, and I began working with the organization.

The momentum for prohibiting the worst and most inhumane weapons in our world, by making use of international law, spread much more quickly than I imagined. And the more I came to know these campaigners, who represent many different nations and have considerable expertise and ability, the more I realized that the adoption of the nuclear weapons ban treaty would be an inevitable outcome. The young, well informed campaigners, in particular, were able to lobby for the nuclear weapons ban treaty to representatives of parliaments and U.N. diplomats. They were also able to enlarge the circle of supporters, across the world, by making effective use of social media. The presence of the experienced campaigners, who have been involved in the anti-nuclear movement for many years, has been indispensable. The frustration of the non-nuclear weapon states toward the nine nuclear weapon possessing nations, including the United States and Russia, both of which seem to have absolutely no intention of fulfilling their obligation to reduce their nuclear arsenals, had reached a peak. Meanwhile, conscientious nations that are unhappy about the inaction of the nuclear weapon states have respected the views and opinions of NGOs as equal partners and, generally, the U.N. conferences to negotiate the treaty were open to these organizations, too. There is no doubt that the nuclear weapons ban treaty was created by passionate citizens and governments in a democratic manner.

We, the A-bomb survivors, have always described nuclear weapons as inhumane. ICAN has stressed the lethal effects that the blast, heat rays, and radiation would have on human health and the catastrophic damage to our planet if nuclear weapons should ever be used again, as well as how to strengthen international laws. In other words, ICAN attached a “theory” to our A-bomb accounts. It has also convinced us that our continued discussion of our experiences, which are painful to remember, is the right thing to do and will never be in vain.

When the atomic bomb was dropped on Hiroshima on August 6, 1945, 72 years ago, I was a second-year student at Hiroshima Jogakuin Junior and Senior High School. I was working as a mobilized student at the Imperial Japanese Army’s Second General Headquarters, 1.8 kilometers from the hypocenter, and I was exposed to the radioactive fallout from the bomb. I somehow managed to crawl out of a collapsed building and flee the hellish scene. However, my sister and four-year-old nephew were both killed. Before my eyes, soldiers poured gasoline over them to cremate their lifeless bodies, and turned them with bamboo poles. They said to one another, “The abdomens haven’t burned yet,” and “The heads are only half-burned.” I witnessed this utterly grotesque scene while in a daze, and this memory has troubled me for many years.

On the nights before I recount my A-bomb experience at schools or gatherings, I always think about the people who were killed by the atomic bomb, and I can’t stop the tears. Before I speak, I always prepare myself with prayerful thoughts. On the first day of the U.N. negotiations to discuss the nuclear weapons ban treaty, in March of this year, I made a speech in the conference hall. I said, “These talks to ban nuclear weapons will benefit the people who are living now and those who will live in the future. But I would like you to feel the presence of the spirits of the hundreds of thousands of people who perished by the atomic bombings in Hiroshima and Nagasaki. We must ensure that the deaths of so many people will not be in vain.” Among them were 351 of my schoolmates.

Reflecting on my early activities which led to my later activism, these efforts began by encountering several influential role models during my high school and university days, and through YWCA activities.

One of these role models was the late Reverend Kiyoshi Tanimoto of Hiroshima Nagarekawa Church, who devoted his life to providing support for A-bomb victims such as orphans. Witnessing his tireless work motivated me to become a socially useful person. From Ichiro Moritaki, the late professor of Hiroshima University, I learned his insight and the word “global,” which sounded so new to me. Hamako Hirose, the former principal of Hiroshima Jogakuin University, said to me that the time when women can participate actively in society had finally come to Japan, thanks to the new Japanese Constitution, and she persuaded me to study abroad. As a result, I went to the United States in the summer of 1954.

In the spring of that year, the crew members of the Japanese fishing boat named the Daigo Fukuryu Maru (The Lucky Dragon No. 5) were exposed to the radioactive fallout from a U.S. hydrogen bomb test conducted in the Marshall Islands. In an interview with an American newspaper reporter, I commented that the atomic bombs dropped on Hiroshima and Nagasaki should have been the end of nuclear testing. When this comment was reported, I received threatening letters that said things like “Go back to Japan” and “Don’t forget Pearl Harbor.” While suffering the loneliness and fear of being harshly criticized as “someone from the enemy nation,” I decided to continue fighting so that no more of my loved ones would die in vain.

In 1955, I got married and later became employed as a social worker. I also worked with the Toronto Board of Education. With the support of my husband, James, who passed away six years ago, I devoted myself to the anti-nuclear movement and peace education. And when I crossed paths with ICAN, the range of my activities expanded even further.

The awarding of the Nobel Peace Prize to ICAN is a tremendous source of encouragement and motivation to those involved in the anti-nuclear movement. At the same time, it serves as a strong rebuke of those nations that continue to justify these inhumane weapons as so-called “nuclear deterrence” and refuse to join the nuclear weapons ban treaty. I feel a rising anger toward the nuclear-armed nations, which lack the political will to pursue nuclear disarmament and stubbornly cling to weapons that are in violation of international law.

I also feel very frustrated by the stance taken by Japan, where I was born and raised, and Canada, where I have lived for many years. Although the Japanese government promises to assume a leading role to help realize nuclear abolition, its words are simply empty rhetoric and it continues to blindly follow the United States, which provides Japan with the nuclear umbrella. It pains me deeply that these two nations that I love are turning their backs on the nuclear weapons ban treaty.

As long as I’m alive, I will continue to work together, hand in hand, with as many people as possible to urge the nuclear-armed nations and the countries still dependent on nuclear weapons to take action to advance the total abolition of nuclear arms. The establishment of the nuclear weapons ban treaty is just the starting point for achieving the elimination of these weapons, so we must go forth, with further effort, to achieve our long-sought goal. Let me repeat here once more: “This is the beginning of the end of nuclear weapons.”

Profile
Setsuko Thurlow was born in Minami Ward, Hiroshima in 1932. She experienced the Hiroshima A-bombing in 1945. After graduating from Hiroshima Jogakuin University in 1954, she studied in the United States. She later got married and immigrated to Canada, where she obtained a master’s degree in social work from the University of Toronto. In 1975, she held an atomic bomb exhibition at the Toronto City Hall, a first in Canada, and also formed a citizens’ group called Hiroshima-Nagasaki Relived. In 2006, Ms. Thurlow received the Order of Canada, that nation’s highest civilian honor. Through her work with ICAN, she delivered a speech at the U.N. negotiations to discuss the nuclear weapons ban treaty. She is also a Hiroshima Peace Ambassador. She currently lives in Toronto.