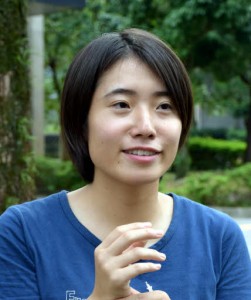 When the nuclear weapons ban treaty was adopted at the United Nations, I was filled with emotion because it became clear to me that the long-running appeals from the A-bomb survivors had finally borne fruit. Things can change not within the framework of nations but through people-to-people connections. The treaty is the result of respecting the voices of civil society.

Ms. Mitsuoka, a fifth-year member of the Nagasaki Youth Delegation, traveled to United Nations headquarters in New York in March, when the negotiations to establish the treaty were being held. She listened to the speech made by Setsuko Thurlow, 85, an A-bomb survivor originally from Minami Ward, Hiroshima who now lives in Toronto, Canada.

I was surprised by the ironic gesture of placing a paper crane on the desk reserved for the Japanese government, which didn’t participate in the talks. I once thought that people in the international community had high expectations for Japan’s role, but it may be that they now feel so disappointed by Japan’s attitude. I can’t help but feel discomfort over the gap between the government and the citizens of Japan. As I listened to Ms. Thurlow’s speech, tears welled up in my eyes because I felt very frustrated over the fact that a representative from the Japanese government wasn’t even there and yet Ms. Thurlow had gathered up all her strength to attend and share her A-bomb experience.

Against the backdrop of rising tensions between the United States and North Korea, the challenge now is how to involve the nuclear nations and the nations under the nuclear umbrella in the treaty process so this agreement can be advanced. The existence of the treaty could form the basis for arguing that nuclear weapons are banned internationally. Even though our government has expressed opposition to signing and ratifying the treaty, I’m confident that our voices would be reflected in its decision-making if there was a large wave of protest on the grassroots level.

In March, I visited Hiroshima as part of the workshop program for our delegation. I felt that the exhibits at the Peace Memorial Museum make use of methods that can clearly convey the fact that the many people who lost their lives in the atomic bombing, in an instant, were all individuals, each and every one. I think those who continue to support the idea of nuclear deterrence are able to do so because they don’t really know the humanitarian consequences of nuclear weapons. It’s imperative that as many people as possible go to the A-bombed cities and understand the inhumane impact of these weapons so that we can all work together to eliminate them from the earth.

This past summer, Nagasaki lost two important figures of the nuclear abolition movement: Sumiteru Taniguchi, an A-bomb survivor who led antinuclear and peace activities and served as co-chairperson of the Japan Confederation of A- and H-bomb Sufferers Organizations (Nihon Hidankyo), and Hideo Tsuchiyama, the former president of Nagasaki University.

One day in the future, no one will personally know exactly what happened in the atomic bombings. We may be the last generation who are able to listen directly to the accounts of the A-bomb survivors. As the future leaders of the world will eventually arise from our generation, we want to take action while we’re still young.

It is the people of my generation, and those that are even younger, like today’s junior high and high school students, that hold the key to finally eliminating nuclear weapons. I have been developing the idea of establishing a non-profit organization that can provide peace education lessons in schools. If people would view the threat of nuclear weapons as a significant issue in their own lives, possessing these weapons would no longer be an option.

Hanako Mitsuoka
Born in Ureshino, Saga Prefecture in 1995 and now a fourth-year student in the Faculty of Education at Nagasaki University. Since January of this year, she has been involved in peace activities as a fifth-year member of the Nagasaki Youth Delegation, a project to develop human resources organized by PCU-NC, an association made up of Nagasaki Prefecture, Nagasaki City, and Nagasaki University that promotes nuclear abolition.