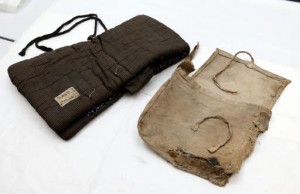 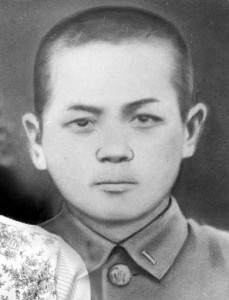 The Nobel Peace Center in Oslo, Norway will display an A-bombed bag, with its tattered shoulder strap and charred fabric from the bomb’s heat rays, as part of a special exhibition to commemorate the awarding of this year’s Nobel Peace Prize to the International Campaign to Abolish Nuclear Weapons (ICAN). The bag once belonged to Yukitoshi Masuda, who was killed in the atomic bombing at the age of 13. He was a first-year student at the Hiroshima Municipal Shipbuilding Engineering School (now Hiroshima Municipal Commercial High School). Masumi Masuda, 83, Yukitoshi’s younger brother and an A-bomb survivor who lives in Nishi Ward, explained that he wanted these memories of his brother to help create a more peaceful world, saying, “I’ll never again have a chance like this to to help advance the cause of nuclear abolition.”

Yukitoshi is said to have been a gentle boy who listened closely to the advice given by his father. He was the eldest of seven children. On the morning of August 6, 1945, Yukitoshi was mobilized to help tear down buildings in order to create a fire lane in Zaimoku-cho (now part of Naka Ward), about 500 meters from the hypocenter.

Masumi saw the flash of the atomic bomb from the schoolyard of Furuta National School, in today’s Nishi Ward. After he returned home, a relative told him, “Yukitoshi hasn’t come back yet.” So Masumi went to the homes of his brother’s classmates, but could find no clue as to his whereabouts. A neighbor then came across Yukitoshi’s bag and air-raid hood, which was found inside the bag, and gave them to Masumi. But Yukitoshi himself never made it home.

When Yukitoshi entered the shipbuilding engineering school, his mother Asano, now deceased, sewed the bag for him from a kimono sash. After the war, the bag was put away in a chest of drawers for many years. But in February 1973, Teruo Masuda, their father, also now deceased, donated the bag and the air-raid hood to the Peace Memorial Museum in Naka Ward.

At the time of the atomic bombing, Teruo was a soldier in the Imperial Japanese Army division in Yamaguchi. When Masumi was a high school student, Teruo muttered softly, “Why did Yukitoshi have to die? I couldn’t do anything for him.” That remark made Masumi aware of the deep sorrow his father felt as a parent. Masumi said, “My father wasn’t able to know how his child died. I think he donated Yukitoshi’s belongings to the museum because he wanted them to be put to a positive use. If he were still alive, he would be happy about this exhibition.”

The Nobel Peace Center will exhibit the A-bombed bag and air-raid hood from December 11, the day after the Peace Prize ceremony, to November 20, 2018. Among many A-bomb artifacts, they were chosen as a way to convey how cruelly the atomic bomb decimated human lives. Masumi said, “I hope the visitors to the exhibition will see my brother’s belongings and imagine the dreadful conditions in the city after the atomic bomb was dropped. I don’t want other people in the world to become victims of nuclear weapons, like my brother.” His wish will now spread overseas through this exhibition.