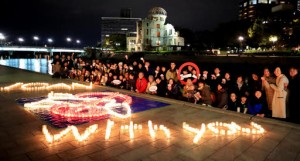 On the evening of December 9, the day before the award ceremony for the Nobel Peace Prize on December 10, young people of the A-bombed city of Hiroshima gathered at the Motoyasu River Shinsui Terrace in the Peace Memorial Park, located in Naka Ward, to light candles to celebrate the winning of the prize by the International Campaign to Abolish Nuclear Weapons (ICAN), a non-governmental organization (NGO).

Beside the river, some 1,000 glass cups containing red and white candles were arranged so that they formed the ICAN name and logo together with the words, “with you.” The participants said that the words and the logo reflect their strong desire to work together with ICAN and all those who passionately believe in the total elimination of nuclear weapons and they hope that their efforts can help advance that goal.

The event began at 6 p.m. and photos of the candles and participants were taken with the A-bomb Dome in the background, on the opposite side of the river. About 100 citizens including A-bomb survivors stood smiling for the photos. ANT-Hiroshima, a non-profit organization (NPO), organized the event and relayed the photos to ICAN. ANT-Hiroshima asked the participants to attach the hashtag “#YesICAN” when posting their messages on social networking sites.

Momoko Miura, 18, a first-year student at Hiroshima Bunkyo Women’s University, in Asakita Ward, said, “Combining this peace event with social networking sites is a new and innovative idea. I plan to share my experience today with my family and friends.”