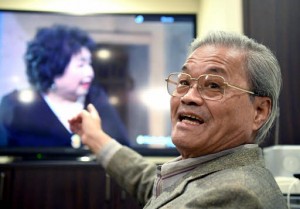 On the evening of December 10 in Oslo, Norway, the Nobel Peace Prize was presented to the International Campaign to Abolish Nuclear Weapons (ICAN), an international non-governmental organization (NGO). From his home in Minami Ward, Hiroshima, Masataka Nakamura, 79, a professor emeritus at the Hiroshima Institute of Technology, watched Setsuko Thurlow, 85, deliver a speech at the award ceremony. Ms. Thurlow, an A-bomb survivor who is originally from Minami Ward and now lives in Canada, is Mr. Nakamura’s aunt. “Her speech serves to inspire young people who will help to advance the abolition of nuclear weapons in the future,” he said. Remembering his mother, cousins, and other family members who lost their lives to the atomic bomb, Mr. Nakamura praised Ms. Thurlow’s courage and achievements.

Mr. Nakamura loves Ms. Thurlow like an older sister. In her speech, Ms. Thurlow spoke about Eiji Kishida, who was four years old at the time of the atomic bombing. Eiji was Mr. Nakamura’s cousin and he died in agony from the wounds he suffered in the A-bomb attack. Mr. Nakamura listened closely to Ms. Thurlow’s speech on his TV linked to the Internet. He said, “Her powerful appeal for a world free of nuclear weapons, based on her own experience, was fully received by the participants at the award ceremony. As her relative, I want to applaud her for giving such a wonderful speech.”

Mr. Nakamura, who was seven years old when the atomic bomb was dropped on Hiroshima, had been evacuated to Saijo, in Hiroshima Prefecture (present-day Higashihiroshima City), prior to the attack. His father, Isamu, who is Ms. Thurlow’s brother, died of illness before that. His mother, Michie, who was a teacher at a junior high and high school affiliated with Hiroshima Girls’ Normal School, led a group of mobilized students to help tear down houses in order to create a firebreak in Zakoba-cho (now part of Naka Ward) on the morning of August 6. She never returned. Because he was only a child at the time, he had believed that his mother had simply gone elsewhere and would likely come back one day. But as the years passed, he gradually gave up the possibility of ever seeing her again.

Every August 6, for the past 40 years or so, he has prayed for his mother at a monument located near the place where she and her students were working that fateful day. Although his mother was a victim of the atomic bomb, he also felt some guilt over the students who had been led by his mother and lost their lives. Until 2012, when he retired, Mr. Nakamura taught electronic engineering at the Hiroshima Institute of Technology. This summer, as a result of declining heath due to his advancing age, he wasn’t able to visit the monument and he reflected on his feelings.

Although ICAN has received this year’s Nobel Peace Prize, the abolition of nuclear weapons, the long-sought goal of the A-bomb survivors, has still not been realized. While praising Ms. Thurlow, Mr. Nakamura also feels troubled over the fact that this momentum for a nuclear-free world, now at its peak, might weaken. He said, “The struggle to achieve a world without nuclear weapons must never stop. Our challenge now involves thinking about how to continue these current activities and how to convey the testimonies of the A-bomb survivors’ experiences after the last of the survivors have passed away. Amid the instability of global conditions, it’s vital that we realistically discuss what sort of approach should be taken to advance the cause of nuclear abolition.”

Mr. Nakamura hopes that the passionate appeal for the abolition of nuclear arms made by his aunt in Oslo will be handed down widely to future generations.