The Key to a World Without Nuclear Weapons: Next Steps Toward Nuclear Abolition, Part 3 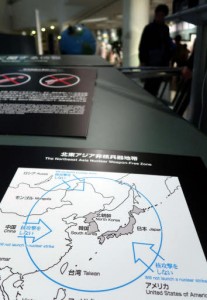 In the Peace Declaration he delivered on August 9 of this year, Nagasaki Mayor Tomihisa Taue urged the Japanese government to join the Treaty on the Prohibition of Nuclear Weapons, saying, “I would like to call this treaty...the Hiroshima Nagasaki Treaty.” As a specific policy step toward a world free of nuclear weapons, Mr. Taue said that the government should examine the concept of a “Northeast Asia Nuclear-Weapon-Free Zone.” Since 1996, the mayors of Nagasaki have almost always included this idea in the Peace Declarations they make. The idea is also included in the leaflet for the Peace Memorial Ceremony handed out at the Nagasaki Atomic Bomb Museum, where one of the exhibition panels explains this concept.

The idea is: Japan, South Korea, and North Korea would not possess nuclear weapons, and the United States, Russia, and China, which are nuclear weapon states, would pledge not to attack or threaten the other three nations with nuclear arms. This is known as the “three-plus-three” arrangement. In 2015, the Research Center for Nuclear Weapons Abolition (RECNA) at Nagasaki University put forth a concrete proposal so that this arrangement could be legally binding.

The concept is characterized not only by denuclearization, but also by other policies that could promote mutual security. These proposed policies include:

*The Korean War, still in a state of truce, is brought to an end, once and for all.

*An agreement is concluded that would establish a permanent council on security issues and this council would serve as a platform for discussing the range of security issues in Northeast Asia, such as nations leaning toward nuclear weapons and regional instability in relation to conventional weapons.

*North Korea would be obligated to join the Chemical Weapons Convention, eliminating the threat of weapons of mass destruction other than nuclear weapons.

To pursue this path toward denuclearization, which RECNA calls “the Nagasaki Process,” the organization began holding non-governmental meetings of experts last year. One such gathering was held in Mongolia in June of this year. Because Mongolia still maintains diplomatic relations with North Korea, they hoped that some participants from North Korea would be able to attend the meeting. But there were no participants from that nation. RECNA now plans to hold meetings in Russia and other locations in the future. It hopes that high government officials from the countries concerned will take part in these meetings as individuals, leading to greater dialogue between governments.

While the Japanese government is opposed to the nuclear weapons ban treaty, citing the dangers of current security conditions, the RECNA director, Tatsujiro Suzuki, stresses the significance of the Northeast Asia Nuclear-Weapon-Free Zone idea. “If we create a system where our security will be guaranteed without nuclear weapons, Japan can then join the treaty,” he explained. “This is a good opportunity for the government of Japan to respond to the calls of the A-bomb survivors by supporting the greater goal of the treaty and making changes in policy.”

But at a session of the U.N. General Assembly, Prime Minister Shinzo Abe stated, “What is needed...is not dialogue, but pressure.” In line with the United States, a nuclear superpower, Japan is working to put stronger pressure on North Korea, arguing that North Korea must first abandon its nuclear development program. Some Japanese politicians have even voiced the idea of deploying the U.S. nuclear arsenal within Japan under the agreement of “nuclear sharing.” There are advocates of nuclear deterrence who support this notion, saying that if North Korea obtains nuclear-tipped missiles that could hit the U.S. mainland, the United States will not use its nuclear weapons for Japan. This is because if the United States uses nuclear weapons, it will expose the nation to the dangers of retaliation by North Korea.

The South Korean public is not very enthusiastic about the idea of denuclearization, either, according to Suh Bo-hyuk, a professor at Seoul National University. During a discussion on the denuclearization of Northeast Asia that was organized by Peace Depot, a Japanese NPO, at the end of October, Professor Suh presented a graph which showed that around 50 percent of South Koreans are in favor of possessing nuclear weapons, while 20 percent are opposed, for the past five years. Expressing his concern, he said that his country’s public support for nuclear weapons will only lead to a nuclear arms race and raise tensions even higher.

Professor Suzuki said that in order to prevent another war from breaking out, the countries concerned, including Japan, should show more willingness to pursue options like establishing a nuclear-weapon-free zone, which would alleviate armed confrontations. He expressed his hope that the public will speak up and call on the government to make stronger diplomatic efforts. Establishing nuclear-weapon-free zones is one of the areas where non-nuclear states can take the initiative to advance a nuclear-free world. It is important for Japan and South Korea to firmly take such initiative and work to involve North Korea.

To boost the momentum for a world without nuclear weapons, RECNA hopes to strengthen its collaboration with Hiroshima. The institute has been conducting joint research on civil discussions in the field of security with researchers at Hiroshima City University. They will present the results of their research at a symposium to take place in Tokyo on November 23.