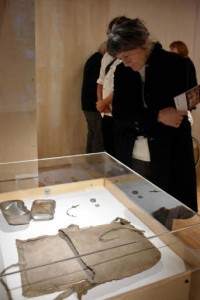 Oslo, Norway — On December 12, a special exhibition opened to the public at the Nobel Peace Center in Oslo, Norway in connection with the award ceremony for this year’s Nobel Peace Prize, which was given to the International Campaign to Abolish Nuclear Weapons (ICAN), a non-governmental organization (NGO). The Hiroshima Peace Memorial Museum, located in Naka Ward, has lent items for the exhibition which show the damage that resulted from the atomic bombing, such as personal belongings from a mobilized student who was killed that day. These items on display, from the peace museums in both Hiroshima and Nagasaki, convey the preciousness of lives that were taken in the A-bombed cities and the inhumane consequences of the use of nuclear weapons.

The artifacts provided by the Hiroshima Peace Memorial Museum include a cloth bag that belonged to Yukitoshi Masuda, who was 13 at the time and a first-year student at the Hiroshima Municipal Shipbuilding Engineering School (now the Hiroshima Municipal Commercial High School). He perished in the bombing when he was mobilized to help tear down houses to create a fire lane. The Nagasaki Atomic Bomb Museum offered a rosary and a wristwatch which stopped at the time the second atomic bomb was dropped on the city of Nagasaki. The Kyoto Museum for World Peace, part of Ritsumeikan University and located in the city of Kyoto, has also lent a lunch box from that time. The bag from Hiroshima is now on display with the other A-bombed artifacts.

Daniele Santi, 38, a member of a peace group in Italy, looked intently at the items. She said firmly, “The presence of people who were killed in the atomic bombings touched my heart. We have to continue making efforts so that war won’t take place again.”

In addition to these artifacts, a photograph of the devastating aftermath of the Hiroshima bombing, taken near the Miyuki Bridge on August 6, 1945 by Yoshito Matsushige, a photographer for the Chugoku Shimbun who is now deceased, and panels which explain ICAN’s activities and the number of nuclear tests performed in the world, will be exhibited until November 20, 2018. Another item that once belonged to Mr. Masuda, his air-raid hood, will be displayed at a later point.

On December 11, prior to the opening of the exhibition, Setsuko Thurlow, 85, an A-bomb survivor who is originally from Minami Ward and now lives in Toronto, Canada, visited the Nobel Peace Center. She delivered a speech at the award ceremony on December 10. In the center’s guestbook, she wrote: “We were able to move on to the next stage of the dream to achieve the absolute elimination of nuclear weapons.”