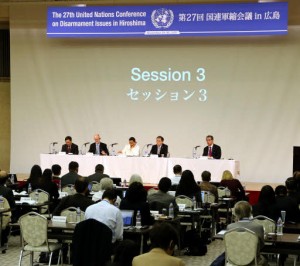 On November 30, the United Nations Conference on Disarmament Issues, held in Naka Ward, Hiroshima, focused their discussion mainly on the Treaty on the Prohibition of Nuclear Weapons, which was adopted in July of this year at the United Nations. While Elayne Whyte Gómez, the Ambassador of the Permanent Mission of Costa Rica to the United Nations Office in Geneva, who chaired the negotiations for the nuclear weapons ban treaty, explained the significance of abolishing nuclear weapons, disarmament experts questioned how to involve the nuclear weapon states and the nuclear-umbrella nations in the treaty. The meeting then concluded after the completion of its two-day schedule.

Ms. Whyte appeared as a panelist for the session on the nuclear weapons ban treaty. She said that under the provisions of the treaty, nuclear weapons cannot be used as a means of war and security and that this marks the beginning of the end of the nuclear age. She emphasized the importance of each nation ratifying the treaty and its early implementation. Trevor Findlay, a fellow in the Department of Social and Political Sciences at the Faculty of Arts University of Melbourne, who hopes that a new norm will be established which views nuclear weapons as evil, pointed out that the security concerns of the countries that continue to rely on nuclear deterrence have not been fully addressed.

Referring to the fact that concrete measures to verify the dismantling of nuclear weapons have not yet been determined, some participants questioned the impact that the treaty will have on the denuclearization of North Korea. In this regard, Akira Kawasaki, a member of the steering committee of the International Campaign to Abolish Nuclear Weapons (ICAN), a non-governmental organization (NGO), responded by saying that establishing verification regime is a challenge that concerns not only the nuclear weapons ban treaty but also the Treaty on the Non-Proliferation of Nuclear Weapons (NPT). He emphasized the need to consider verification measures as an issue common to both the nuclear weapons ban treaty and the NPT.

In an interview with the press after the conference concluded, Izumi Nakamitsu, the U.N. Under Secretary General and High Representative for Disarmament Affairs, summed up the meeting by saying that although there were a number of different opinions on the nuclear weapons ban treaty, there was a suggestion that each country put forward ideas and wisdom to ultimately make the treaty a useful agreement, and therefore the discussions that took place at the conference were very fruitful. She also announced that consideration is now being given to the idea of holding a U.N. Special Session on Disarmament among the U.N. member states for the purpose of overcoming the impasse on nuclear disarmament.

The two-day conference, sponsored by the United Nations Regional Centre for Peace and Disarmament in Asia and the Pacific, was attended by 60 people from 12 countries and two organizations.