The Key to a World Without Nuclear Weapons: Next Steps Toward Nuclear Abolition, Part 4 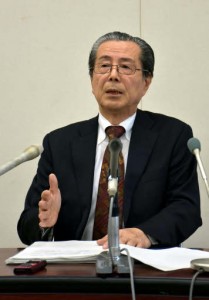 October’s meeting of the First Committee of the U.N. General Assembly was broadcast to the world via the Internet from United Nations headquarters in New York. The nuclear weapon states, which oppose the nuclear weapons ban treaty, criticized it for lacking a mechanism by which compliance with the agreement would be verified. The United States and the United Kingdom said, respectively, that the treaty does not include reliable verification measures and that it does not adequately deal with technical challenges related to verification.

Yasuyoshi Komizo, the secretary general of Mayors for Peace (for which Hiroshima Mayor Kazumi Matsui serves as president), once worked for the Japanese Ministry of Foreign Affairs and was temporarily transferred to the International Atomic Energy Agency (IAEA) which conducts inspections to prevent nuclear material from being converted for military purposes. He analyzed the assertions made by the nuclear weapon states from the perspective of an advocate of the treaty.

Mr. Komizo also points to some problems related to the nuclear weapons ban treaty. If someone from a non-nuclear weapon state undertakes a verification inspection, the risk of proliferation of nuclear weapon technology to that person’s country cannot be ruled out. Furthermore, although monitoring the entire process, from the start of dismantling the nuclear warheads until the point that they are completely dismantled, would be a more reliable method, doing so could result in leaking the technology that each nation wants to keep secret, and thus there is no choice but to place limits on the work to verify the dismantling process.

There are some international conferences that could be useful for verifying arms reduction under the nuclear weapons ban treaty. One is the International Partnership for Nuclear Disarmament Verification (IPNDV), which was launched at the initiative of former U.S. President Barack Obama in 2014, and in which both nuclear-armed states and non-nuclear weapon states explore reliable verification measures. Last year’s meeting in Tokyo was attended by Mexico and various other countries that support the nuclear weapons ban treaty. Japan, the host of the meeting, believes that verification measures are a necessary part of the process of eliminating nuclear weapons and it intends to make a positive contribution toward establishing such measures.

In addition to dismantling the nuclear warheads, the nuclear weapons ban treaty has specified other behaviors that require verification. These include the development of nuclear weapons as well as nuclear testing that does not involve a nuclear explosion. Although the latter is not specified by the Comprehensive Nuclear Test Ban Treaty (CTBT), whether such nuclear testing and nuclear development are actually not being pursued must be checked. However, because nuclear testing that produces no nuclear explosion, and nuclear development, are difficult to monitor from the outside, some experts say that there is a need for a system that would encourage scientists and engineers to blow the whistle on these behaviors.

For nuclear testing that involves explosions, the Comprehensive Nuclear Test Ban Treaty Organization has already established facilities in each nation to monitor this testing. If the Nuclear Test Ban Treaty enters into force, the verification capabilities of on-site inspections will be improved. However, the treaty has not yet been ratified by the United States and China, although ratification by these countries is required for the CTBT to enter into force. Japan has been advocating the CTBT, and mentioned the early ratification of this treaty in the resolution on the abolition of nuclear weapons that it submitted to the U.N. General Assembly this year.

On November 27 and 28, the Group of Eminent Persons Conference will be held in Hiroshima under the auspices of Japan’s Ministry of Foreign Affairs. In an interview with the press at Hiroshima City Hall on November 22, Mr. Komizo announced that he will attend the conference on both days as a participant and promote the importance of verification. He said, “Now that the nuclear weapons ban treaty has been established, all nations will need to take the next step, rather than remaining at a standstill and simply complaining about the contents of the treaty.”