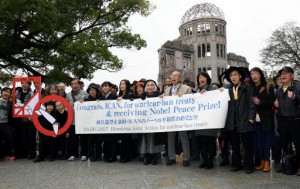 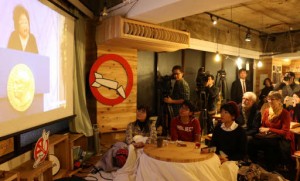 On December 10, when the Nobel Peace Prize was presented to the International Campaign to Abolish Nuclear Weapons (ICAN), citizens’ groups in Hiroshima, the A-bombed city, held a gathering to celebrate ICAN’s award and vowed to further strengthen their activities to advance nuclear abolition and peace.

On that afternoon, just before the award ceremony began, an executive committee comprised of 27 citizens’ groups gathered in front of the A-bomb Dome in Naka Ward. At this gathering, some 100 people carried a banner with a message, written in both English and Japanese, which welcomed the establishment of the nuclear weapons ban treaty and the awarding of the Nobel Peace Prize to ICAN.

Kazane Hisanaga, 17, a third-year student at Minami High School and a High School Student Peace Ambassador from Asakita Ward, made a speech opposing the notion that the creation of the nuclear weapons ban treaty was impulsive. She said, “We will have fewer and fewer opportunities to hear the A-bomb experience testimonies directly from A-bomb survivors, so now is the time that we should take further steps toward the abolition of nuclear weapons.” In the statement produced by the gathering, the participants criticized the Japanese government for relying on U.S. nuclear deterrence and called for the government to act prudently by signing and ratifying the treaty.

That night, there was another gathering at Hachidorisha (in Dobashi-cho, Naka Ward), a café where guests talk over peace issues. About 20 people watched the Nobel Peace Prize award ceremony on live television. After listening intently to the ceremony speeches, they rose for an ovation. Some people were moved to tears.

Yuta Takahashi, 17, a second-year student at Eishin High School in the city of Fukuyama, said, “We will make nuclear weapons taboo with the power of citizens.” Takaaki Morikawa, 78, a resident of Nishi Ward who was exposed to the “black rain” that contained radioactive fallout after the A-bomb blast, said firmly, “I see how strategies in which people are united in building an anti-nuclear network are effective. We should therefore develop a strategy that will drive the nuclear weapon states toward the abolition of nuclear weapons to prevent the awarding of the Nobel Peace Prize from ending up as just fanfare.”