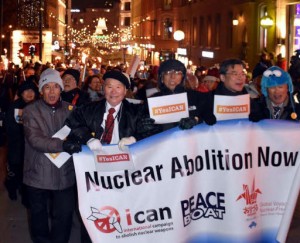 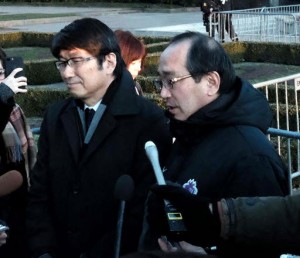 Oslo, Norway – On December 10 in Oslo, where the Nobel Peace Prize award ceremony was held, Hiroshima Mayor Kazumi Matsui and A-bomb survivors celebrated the winning of the Nobel Peace Prize by the International Campaign to Abolish Nuclear Weapons (ICAN) and renewed their determination to eliminate nuclear arms from the earth.

After the award ceremony, Hiroshima Mayor Kazumi Matsui, who was invited to the event along with Nagasaki Mayor Tomihisa Taue, said to reporters, “At the award ceremony, the speakers mentioned the inhumane nature of nuclear weapons and the things Mayors for Peace has persistently appealed for. I’d like the political leaders of all nations to understand how earnestly we, the global citizens, desire a world without nuclear weapons.”

Twenty A-bomb survivors from Hiroshima and Nagasaki, who came to Norway on a tour organized by Peace Boat, a Tokyo-based NGO, watched the award ceremony at a public viewing site and then took part in a torch parade to celebrate ICAN’s award. They paraded down the street for about one kilometer from Oslo Station to their hotel, together with local citizens, while carrying torches and banners in their hands and chanting “Yes, I can” to convey their support for the abolition of nuclear weapons.

Toshiyuki Mimaki, 75, the vice chair of the Hiroshima Prefectural Confederation of A-bomb Sufferers Organizations (Hiroshima-ken Hidankyo, chaired by Sunao Tsuboi), said, “Nuclear weapons are the ultimate evil, and therefore I will continue to emphasize that the abolition of nuclear weapons is the only way to ensure peace in the world.” Toshiko Tanaka, 79, an A-bomb survivor from Hiroshima’s Higashi Ward, said with delight, “I was moved by the local citizens chanting ‘I can’ and the solidarity of the people. I was greatly encouraged.”