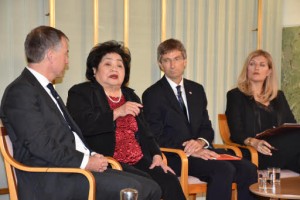 Oslo, Norway – The International Campaign to Abolish Nuclear Weapons (ICAN), a non-governmental organization (NGO), held a news conference on December 9, the day before the award ceremony for the Nobel Peace Prize to be held in Oslo, Norway. A-bomb survivor Setsuko Thurlow, 85, who was born in Hiroshima and now lives in Toronto, Canada, said her speech will convey the tragedy that took place in Hiroshima as a consequence of the atomic bombing.

Working together with ICAN, Ms. Thurlow has delivered speeches at international conferences that include the negotiations to establish the Treaty on the Prohibition of Nuclear Weapons which took place this year at the United Nations. At the news conference, she said that survivors could not even speak about their A-bomb experiences during the days when Japan was still under the occupation of the Allied Forces. She stressed that, after enduring this era, they began trying to communicate directly to the world about the humanitarian consequences of nuclear weapons out of the conviction that no one else should ever have to face the same kind of suffering. She criticized the Japanese government, which is opposed to the nuclear weapons ban treaty, for its “inconsistent” policy, adding that the government has a “moral responsibility” to make stronger efforts to eliminate nuclear weapons.

Also present at the news conference were Beatrice Fihn, ICAN’s executive director, who will also deliver a speech during the award ceremony, and Tilman Ruff, one of the members of ICAN’s international steering committee. He is a doctor and one of the founding members of the group. They called for the early entry into force of the treaty that prohibits nuclear weapons.

ICAN, which is a coalition of 468 organizations in 101 countries, is based in Geneva, Switzerland. In October the Norwegian Nobel Committee announced that the Nobel Peace Prize for 2017 was awarded to ICAN due to its “groundbreaking efforts to achieve a treaty-based prohibition” on nuclear weapons.

Attendees of the award ceremony will include Akira Kawasaki, 49, a member of the executive committee of Peace Boat, a Tokyo-based NGO, and the only Japanese member of ICAN’s international steering committee, Terumi Tanaka, 85, and Toshiki Fujimori, 73, co-chair and assistant secretary general, respectively, of the Japan Confederation of A- and H-Bomb Sufferers Organizations, Hiroshima Mayor Kazumi Matsui, and Nagasaki Mayor Tomihisa Taue.