Silent Witness: “Memories from the hypocenter – A-bombed artifacts found in the Nakajima district” 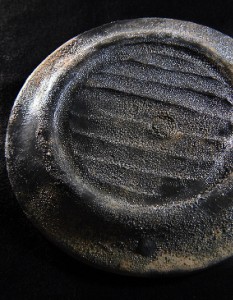 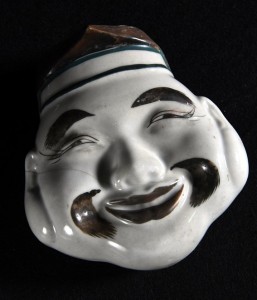 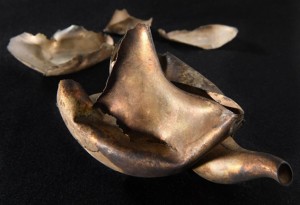 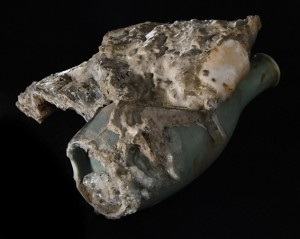 [Confectionary tray damaged by intense heat]
This tray was found in the ruins of a private home after the war. Its glaze melted because of the high-temperature flames. The boy who lived in the house was killed while his mother and sister remain missing to this day.(Donated by Ensuke Kushima in 1973)

[Vase for a single flower left by a husband]
The owner of the vase, who ran a barber shop in the district, went missing after the atomic bomb. This vase was miraculously left in the air-raid shelter at the back of the house. The man’s wife managed to survive because she had evacuated earlier. After the war, she reopened the barber shop and displayed this vase inside.(Donated by Kinuyo Nishiguchi in 1999)

[Bent and broken kettle]
This kettle was kept with great care after it was found in the ruins of a house owned by a man who returned from Hawaii and ran a trading company. The bodies of the man and his second son were found in their home. The son’s wife died eight days after the bombing. The company’s brick building, which was used as a bank, largely collapsed.(Donated by Sumie Fujii in 2013)

[Choshi bottle (bottle to serve Japanese sake) with melted glass attached and hardened]
This bottle was unearthed in the ruins of an inn one week after the atomic bombing.(Donated by Hatsumi Tsushima in 1990)

The Hiroshima Peace Memorial Park, located in Naka Ward, was full of international visitors during the New Year’s holiday. Some were from America and Europe; others were Chinese speakers; and women from Islamic nations could also be seen. People stood in line to pray before the Cenotaph for the A-bomb Victims, as if they were paying a visit to a shrine on New Year’s Day. This has become a typical scene since the Hiroshima Peace Memorial Museum began the practice of opening its doors on January 1.

The number of visitors to the A-bombed city, particularly from abroad, is steadily increasing. In the museum, they learn about the catastrophic damage to the city wrought by the atomic bomb; in the park, designated as a place of national scenic beauty, they tour the monuments and other memorial sites. How many of these visitors, though, actually reflect on the fact that the annihilated part of town now beneath their feet was once the bustling commercial district called Nakajima?

On August 6, 1945, one single bomb charred this area and its roughly 4,400 residents. Over the years, the Hiroshima Peace Memorial Museum has received many items that convey fragmented memories of the vanished district. Marked by the bomb’s blast and heat rays, many of these objects were picked up in the ruins by loved ones of the victims in the aftermath of the bombing. Others have been unearthened beneath the surface of the park during work to improve the grounds and facilities.

Most of the A-bombed artifacts are held in storage and are not displayed in the museum. However, the story that accompanies each one relates the city’s history of horror and rebirth.

A trove of artifacts still lies buried beneath the ground. When the City of Hiroshima was pursuing some excavation work in 2015, prior to the start of seismic reinforcement efforts on the museum, a great number of A-bombed items were found.

In the area known as Zaimoku-cho, many milk bottles, melted and deformed, were unearthed at the spot where a milk delivery business once stood. A lot of household items, such as a charred rice paddle and a burnt triangle-shaped ruler, were also dug out of the ground, reminders of the daily lives that were led before the atomic bombing. Some have been put on display in the museum since last year, and they will eventually join the other items in storage.

Last November, a citizens’ group held a meeting to discuss the preservation of A-bombed artifacts from the ground of the Peace Memorial Park. One man, who spent his early childhood in the Nakajima District, said that he often feels the impulse to ask park visitors to walk quietly through this area because the ground still contains many victims at rest. However, with the passing of generations, it is becoming more difficult to hand down detailed memories of the former district, even for those families with direct links to the area.

This is why we must turn our thoughts to the lost history of the park, which now serves as a hub for sending out messages of peace. This year the Chuguku Shimbun will begin a new series, “Silent Witness,” to shed light on items that are stored, but not displayed, at the Hiroshima Peace Memorial Museum. To start, we will introduce four artifacts from the Nakajima district.

A busy district with homes and shops

The history of the Nakajima district is believed to extend back to the end of the 16th century, when a castle town was established in Hiroshima. This was delta land that lies between today’s Motoyasu River and Honkawa River. The area flourished, in particular, from the end of the Edo period to the early Showa period (from the mid-19th century to the mid-20th century.)

The area where the Peace Memorial Park now lies, along with land south of the park, are where the neighborhoods known as Nakjima-honmachi, Zaimoku-cho, Tenjin-machi, Motoyanagi-cho, and Kobiki-cho once existed. There were many houses, businesses, temples, inns, and hospitals standing side by side.

This area was almost directly beneath the exploding bomb and it was instantly annihilated. After the war, shacks were raised here for a time, but based on the Hiroshima Peace Memorial City Reconstruction Law, which was enacted on August 6, 1949, construction of the park began on 12.21 hectares of land of the former Nakajima district and the area around the A-bomb Dome.

The Cenotaph for the A-bomb Victims was completed in 1952, and the Hiroshima Peace Memorial Museum opened in 1955. When the A-bomb Dome was registered as a World Heritage site in 1996, the Peace Memorial Park became part of a protected zone. Then, in 2007, the park was designated a place of national scenic beauty.