Photos of Hiroshima, taken before the A-bombing, to be exhibited in U.S. by photographer’s granddaughter 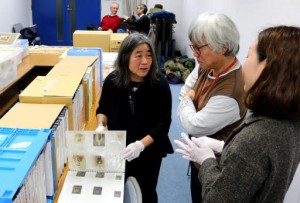 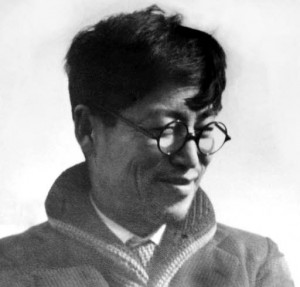 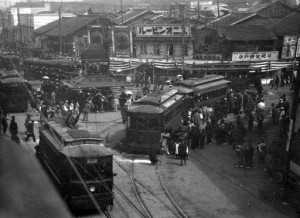 Before the atomic bombing of Hiroshima, Wakaji Matsumoto, who died in 1965 at the age of 76, ran a photo studio near an intersection in today’s Kamiya-cho, located in Naka Ward, and took photos of the townscape and people’s lives before these disappeared in the A-bomb attack. Now, Karen Matsumoto, 63, Wakaji’s granddaughter and a third-generation Japanese-American living in the U.S. state of Washington, is moving forward with a plan to hold an exhibition of her grandfather’s photos in the United States in 2020, the 75th anniversary year of the atomic bombing.

Karen came to Japan last month and visited the Hiroshima Municipal Archives where Wakaji’s photos are archived. Together with Hitoshi Ouchi, 60, her cousin and a resident of Naka Ward, she looked through the great number of photos left behind by her grandfather.

Wakaji immigrated from Jigozen, Hatsukaichi to the United States in 1906. He then lived there for about 20 years and learned about the latest camera technology. Before the war broke out, he went back to his hometown and, based in his photo studio in Hiroshima, took photos of local schools and events. He also took many photos of daily life in the city using the panorama photo technique, which was unique at the time, and other artistic methods. Because he moved to Jigozen before the atomic bomb was dropped on Hiroshima, his photos were safely kept in his family’s home.

At the exhibition in the United States, 75 photos are expected to be put on display, including a prewar panoramic photo near the Aioi Bridge and the Hiroshima Prefectural Industrial Promotion Hall (the A-bomb Dome building before the atomic bombing) and photos that vividly capture a trade fair held at the industrial promotion hall, local festivals, and the scenery of shopping streets.

In addition, Karen has asked an acquaintance, a filmmaker, to produce a 6-minute documentary film which traces Wakaji’s life. The film will be shown at the exhibition venue. Also on exhibit will be photos of Japanese-Americans that Wakaji took at farms and schools when he lived in the United States. Karen said she would like to hold the exhibition at such sites as the Japanese American National Museum in Los Angeles and the California Historical Society in San Francisco.

The members of Wakaji’s family became separated during the war and have lived apart, in Japan and in the United States, since that time. Karen, who used to work as a high school teacher in the United States, is the second daughter of Hiroshi Matsumoto, who was Wakaji’s eldest son and a second-generation Japanese-American. Hiroshi died in 2014.

Karen said that she would like to share ordinary scenes of life in Hiroshima before the atomic bombing to American visitors so they can understand what really happened when the atomic bomb was dropped. She added that she wants to also show the lives of Japanese-Americans to emphasize the importance of accepting immigrants, now that anti-immigrant sentiment has risen in the United States under the Trump administration.