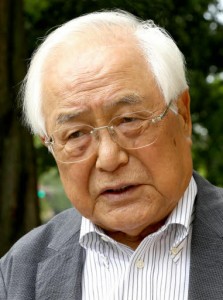 Among the international community, the fact that there can be no winners or losers in a nuclear war, which could destroy human civilization, is widely-shared wisdom. And yet the Nuclear Non-proliferation Treaty (NPT) regime doesn’t seem to be working: The nuclear powers have failed to carry out nuclear arms reductions and use the NPT as their excuse to continue possessing nuclear weapons. We haven’t been able to stop nuclear proliferation, either. In these circumstances, the nuclear weapons ban treaty offers hope for human beings to survive.

During your time as mayor of Hiroshima, you called for the establishment of “a treaty to ban the use of nuclear weapons” in the Peace Declaration you read at the annual Peace Memorial Ceremony. You also called on the Japanese government to break away from their dependence on the U.S. nuclear umbrella.
Clinging to the nuclear umbrella, and threatening other countries on the assumption that nuclear arms could be used in certain circumstances, is an outdated way of thinking. Although the United States claims that the nuclear deterrent is needed to maintain peace, they have still repeatedly engaged in war. When we look at the issues involving North Korea, it is clear that nuclear weapons don’t help create peace, but rather, pose a security risk.

Japan, as the nation that experienced the atomic attacks, ought to join the nuclear weapons ban treaty and take the lead in involving the nuclear nations. However, our nation shows no intention of taking that role. On the contrary, the government’s policy lacks consistency. For example, Japan concluded an agreement with India, a non-signatory of the NPT, to cooperate in the peaceful use of nuclear energy and make it possible to export Japan’s nuclear energy technology. The government says that the NPT is important, but it is turning the treaty into a mere facade.

The average age of the A-bomb survivors is now over 80. Hiroshima’s appeal for nuclear abolition and peace has come to a crossroads.
The atomic bombings were wrong. That’s why we call for the abolition of nuclear weapons, to save the human race from a similar catastrophe. That is the pillar of Hiroshima’s appeal. If we admit that the atomic bombings were necessary not to lose more lives of American soldiers, these inhumane weapons might be used again for the same reason the United States claimed at that time. It’s indeed unfortunate that the heads of local governments and some organizations wouldn’t call for an apology from former U.S. President Barack Obama when he visited Hiroshima, because I think this undermined Hiroshima’s appeal.

We should once again listen to the voices of the A-bomb victims, who died such tragic deaths, and face the memories of suffering and tribulation borne by the survivors. We then need to present a vision of the ideal society we’re seeking after nuclear weapons have been abolished. The lack of this future vision has hampered Hiroshima’s appeal. No society is peaceful as long as discrimination, poverty, and human rights violations still exist.

I think that an ideal country is one that renounces war and respects different cultures and human rights, as stipulated in the Constitution. We first hold this vision of an ideal world, then we eliminate the nuclear weapons that stand as an obstacle to realizing that vision. Hiroshima’s desire to abolish nuclear weapons would then be linked to a future vision that could evoke the sympathy and support of people around the world.

Takashi Hiraoka
Born in Osaka in 1927. After working as editor-in-chief at the Chugoku Shimbun and president of RCC Broadcasting Company, he became mayor of Hiroshima in 1991 and served two terms for a total of eight years. While in office in 1995, he appealed to the International Court of Justice (ICJ) in the Hague, the Netherlands, arguing that the use of nuclear weapons was against international law by citing the devastating humanitarian consequences and damage that the atomic bombings produced.