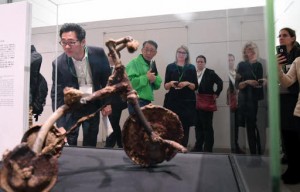 A training program for U.N. staffers to learn about the true damage wrought by the atomic bombing began on December 2 in Hiroshima. The six participants work at the three U.N. offices that have a permanent exhibit of A-bomb-related materials. This program has been sponsored by the Hiroshima municipal government with a view to boosting international momentum for the movement that seeks the abolition of nuclear weapons.

Invited by the city government, guides and trainers of guides from U.N. offices in New York; Geneva, Switzerland; and Vienna, Austria are taking part in the program. On the first day, they toured the Peace Memorial Museum and the Peace Memorial Park, guided by a peace volunteer.

In front of panoramic photos which depict the area around the hypocenter in the aftermath of the atomic bombing, the participants were told that the temperature was around 2,000 degrees Celsius at the spot where the museum now stands and that the town was charred in an instant.

Vincenzo Pugliese, 48, who works at U.N. headquarters in New York, said that he wanted to share not only the number of victims but also the sufferings of the survivors.

The training will continue until December 5. The participants will listen to the experiences of two A-bomb survivors and attend lectures by researchers from the Radiation Effects Research Foundation, located in Minami Ward, and the Hiroshima Peace Institute at Hiroshima City University, in Asaminami Ward.

The first permanent exhibit of A-bomb-related materials at a U.N. office opened in New York in 1983, followed by the European headquarters in Geneva in 2011 and the U.N. office in Vienna in 2015. The Hiroshima Peace Memorial Museum provides the materials for the exhibits at these locations.