Gashin Kayo, 46, chief priest of Myokeiin Temple: “Passing the baton of peace to the next generation” 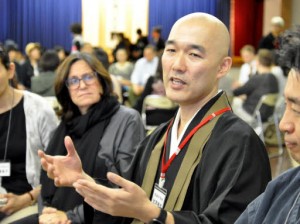 The “Hiroshima Nagasaki ZERO Project,” a project to send out messages of peace from the A-bombed cities through art, was held at my temple in October. The fact that the temple was used as a place to think about peace was a joy not only for me but also, I’m sure, for my late father and grandparents. My family experienced the atomic bombing and worked very hard to reconstruct the temple after the war. I’d like the temple to be a place that’s open to everyone, a place where people and their problems are listened to and supported through close relationships.

My grandfather was the chief priest of Seiganji Temple in Tenjin-machi, where Peace Memorial Boulevard is now located. In the spring of 1945, the temple was torn down, along with homes in that area, to create a fire lane in the event of air raids. The family then moved to Hakushima Kuken-cho to stay at another temple. My great-grandfather, my grandparents, my father and my uncle, who was a newborn at the time, experienced the atomic bombing there.

My grandfather and father took shelter behind a large tree and escaped injury. My grandmother, who was breastfeeding my uncle in the house, managed to survive, though her eye and belly were speared by pieces of wood. However, my great-grandfather was pinned down by a beam of the collapsed house and was unable to flee. He was enveloped in the approaching flames.

The family endured a difficult time until the temple was finally restored at its current location in Komachi, Naka Ward. My grandfather worked as a Buddhist monk while teaching at a high school in the evening, and the family managed to get by. When I was a child, my grandmother often told me about those days, saying evenly, “I’m so grateful that I can live with my grandchildren.” She also said that she was sorry that the temple could not be saved from demolition during the war.

I wanted to be an architect. With a promise to my father that I would become a Buddhist monk one day, I went to college in Tokyo and studied architecture. I even studied in the United States when I was in graduate school. Although I was able to join a major architectural firm, despite the tight job market, I had to work about 100 hours of overtime each month, sitting there at a computer for hour after hour. I increasingly felt that the job didn’t suit me because I wanted to communicate more with people.

At the age of 29, I returned to the temple and my aging parents. At first, I considered being both a Buddhist monk and an architect. But I changed my mind and decided to concentrate on my monk’s duties when I had to perform a wake and a funeral all by myself two months after I returned. Two years ago, I met Cannon Hersey, an American artist who is spearheading the Hiroshima Nagasaki ZERO Project, and I began to support this effort.

Because of my background in architecture, I have a love for art. I find it interesting to see young people think deeply about peace and express their ideas through art in the hall of my temple. I also make the hall available to elementary school students so they can listen to the accounts of A-bomb survivors. This is my way of showing gratitude for the people who supported the reconstruction of the temple and providing my own support for future generations.

To me, “peace” is a state where there is no conflict. To realize this, it is important that we learn from our failures. I myself face distressing experiences, but they’re nothing compared to what my grandparents went through. When the pain becomes too much, I simply laugh it off. A failure becomes a valuable experience when we can laugh about it one day.

Let us laugh off our struggles with failure and anguish over adversity.

Gashin Kayo
Born in Naka Ward, Hiroshima. Graduated from the Hiroshima University Affiliated Junior High and High School. Entered Tokyo University of Science, then Tokyo Institute of Technology Graduate School to study architecture. Returned to Hiroshima in 2001 and became chief priest of Myokeiin Temple in 2015. He seeks to make the temple a place of openness, where people can visit more freely, by supporting art activities that promote peace and listening to people’s problems out in the community.