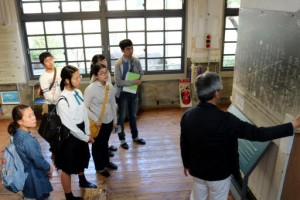 “We plan to step up our efforts to shape global opinion on nuclear disarmament and the abolition of nuclear weapons and to help realize a peaceful world without war and conflict.” Under this commitment, the Hiroshima Peace Media Center was established as a new division of the Chugoku Shimbun on January 1, 2008 and a unique website was launched.

The Peace Media Center gathers information on efforts to hand down the A-bomb experiences and the movement seeking the abolition of nuclear weapons, and contributes articles to the “Peace Page” of the morning edition of the Chugoku Shimbun. In addition, the Peace Media Center also uploads news articles, feature articles, articles in a series, editorials, and columns written by reporters at the newspaper headquarters and bureaus, with the website then transmitting this content to the world, mainly in English.

To date, some 22,600 Japanese articles have been added to the website, with around 5,100 of these having been translated into English. With the aim of conveying an appeal for peace to all the nuclear weapon states, some articles have also been translated into Chinese, French, and Russian since 2014. Over the past 1o years, the Hiroshima Peace Media Center website has been accessed by people in nearly 200 countries and regions, and feedback and inquiries have been received from all parts of the world.

Another pillar of the Peace Media Center’s work involves nurturing young “junior writers” who are junior high and high school students. These teenagers organize the monthly “Peace Seeds” article, in which they gather information and write their own article from the perspective of today’s youth. So far, their articles have appeared in 50 issues of the newspaper. The junior writers have also been taking part in reporting for the series “Survivors’ Stories,” with more than 100 of these articles about the accounts of A-bomb survivors published on the Peace Page.

In 2015, the year that marked the 70th anniversary of the atomic bombing, a group of junior writers and university students were dispatched to Europe as part of a study tour to learn about the Holocaust (the mass murder of the Jewish people during World War II). Others were also sent to the United States to report on the Review Conference of the Parties to the Treaty on the Non-Proliferation of Nuclear Weapons (NPT) held in New York.

In Hiroshima, where the junior writers live and where the advancing age of the A-bomb survivors and their ability to continue sharing their experiences has become a large concern, the junior writers have been producing a newspaper for peace studies entitled “Hiroshima Insight” since 2013, printed in a tabloid format. More than 200,000 copies of this newspaper have been published annually, with copies distributed free of charge to mainly junior high schools and high schools in Hiroshima Prefecture and junior high schools in the eastern part of Yamaguchi Prefecture. These copies of “Hiroshima Insight” are widely used at the schools for peace education.

The Peace Media Center has also pursued special projects, such as the “Hiroshima-Nagasaki Declaration,” which drew the support of 17 Nobel Peace Laureates and was publicized by the Chugoku Shimbun in 2009. It was the first time that a group of Nobel Peace Laureates made a joint appeal to the world for the abolition of nuclear weapons, and in this declaration they reaffirmed the idea that nuclear weapons can and must be eliminated. Eight years after the announcement of this declaration, the Treaty on the Prohibition of Nuclear Weapons was eventually established at the United Nations.

When the atomic bomb decimated Hiroshima, the Chugoku Shimbun lost 114 of its employees, and since that time the company has persistently appealed for the abolition of nuclear weapons and enduring peace in the world. It will continue to promote this important mission in the future. On the 10th anniversary since it was established, the Hiroshima Peace Media Center now plans to revamp its website. In addition to contributing articles to the newspaper, it will enhance the website with various functions that can convey, in easily-understood ways, the damaging effects of the atomic bombing and the reconstruction of the city. Making greater use of video to transmit peace-related messages, it will also seek to strengthen the interactive nature of the website.