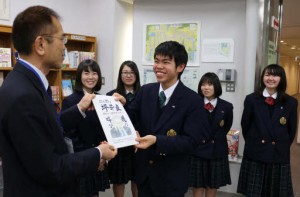 The human rights club at Eishin Junior & Senior High School, located in Fukuyama, Hiroshima prefecture, has compiled a booklet on the life of A-bomb survivor Sunao Tsuboi, 92, the chair of the Hiroshima Prefectural Confederation of A-bomb Sufferers Organizations. After interviewing Mr. Tsuboi about his A-bomb experience and his life after the bombing, the participants of the 25-member club made a valuable written record that relates this survivor’s life in his own words. The booklet was donated to the Hiroshima Peace Memorial Museum on December 21. Visitors to the museum can read the booklet.

The A4-size booklet, titled Ningen Tsuboi Sunao (Human Sunao Tsuboi) consists of 30 pages and describes what Mr. Tsuboi experienced using photos and illustrations: experiencing the atomic bombing at a location of about one kilometer from the hypocenter; steeling himself for death many times; and calling himself “Mr. Pikadon” [a combination of words that mean the flash (“pika”) and boom (“don”) of the atomic bomb] while working as a junior high school teacher.

Members of the human rights club became acquainted with Mr. Tsuboi at an event organized by the Japan Confederation of A- and H-Bomb Sufferers Organizations in 2015. Learning that his life had not been covered in book form, they asked whether they could make a booklet about him at the beginning of 2016. In March of that same year, they interviewed him for a total of five hours over two days. It took them six months to transcribe the lengthy interview. The transcript was then edited down to one-third of its original length before the booklet was completed this past November.

At first, Mr. Tsuboi did not want the booklet to include an episode where he attempted suicide with his girlfriend because of the discrimination he had experienced as an A-bomb survivor in the process of getting married. But he agreed to include this incident after Yuta Takahashi, 17, the president of the club, wrote a letter to Mr. Tsuboi asking him for his permission, saying that the episode was important for emphasizing the inhumanity of nuclear weapons.

On December 21, Yuta and four other members of the club visited the museum and handed seven copies of the booklet to Shuichi Kato, 56, the deputy director of the museum. Yuta said, “Mr. Tsuboi is an icon among A-bomb survivors, but he comes across as such a genuine person. I feel relieved that we’ve completed this project and were able to put down his unique experiences on paper.” The club will give copies of the booklet to public libraries in the prefecture and will also create an English version.