The Key to a World without Nuclear Weapons: Report from Oslo, Part 2 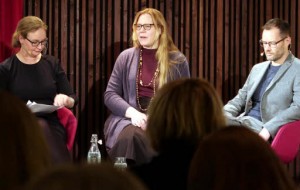 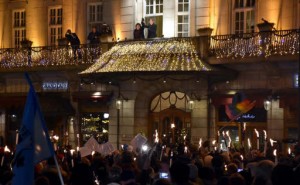 Oslo, Norway was still aglow on December 12, two days after the award ceremony for this year’s Nobel Peace Prize. About 100 people came together for a gathering about the nuclear weapons ban treaty. With a sense of elation, Susi Snyder, 40, a member of PAX, an antinuclear group in the Netherlands, put forward ideas that she said would advance the goal of nuclear abolition. PAX is a key partner in the work of the International Campaign to Abolish Nuclear Weapons (ICAN), this year’s Nobel Peace Prize winner.

PAX is moving forward with efforts to spread a list of banks and pension funds that do business with companies involved in the production, maintenance, or upgrading of nuclear weapons and calling on people to avoid doing business with such banks and funds. Ms. Snyder explained that this action would help cut off financial support for nuclear arms. Currently, 390 financial institutions in 26 nations comprise the scope of this initiative, based on transactions that took place between 2013 and 2016.

If the citizens of every nation would avoid dealing with these banks, the financing for nuclear weapons would drop and businesses involved in the nuclear weapons industry would go into decline. PAX hopes that favorable winds will blow this effort forward after the establishment of the nuclear weapons ban treaty, which brands nuclear arms as “inhumane weapons,” and the awarding of the Nobel Peace Prize to ICAN.

In fact, in early October, an environmental group in Norway called out the Nobel Foundation, the organization based in Sweden which funds the Nobel Prize money, claiming that it was very likely the foundation had made an indirect investment in companies with links to nuclear weapons production through the purchase of an investment trust. ICAN also requested that the foundation provide a detailed explanation of these circumstances. Then, in late October, the foundation finally announced that it would strengthen its code of ethics and, by March 2018 at the latest, cut ties to all such investments, including this indirect connection.

Ms. Snyder said that the foundation’s decision will surely have a positive knock-on effect to other financial institutions. PAX has confirmed that one bank in the United States, a nation that opposes the treaty, has stated that it will now pursue a policy, following the establishment of this treaty, of not making any investments linked to the production of nuclear weapons. PAX offers this example as a model on its website.

While not directly related to nuclear weapons, similar actions are also being taken in Japan. This month, the Mitsubishi UFJ Financial Group announced that it would completely prohibit financing to manufacturers of cluster munitions because of the inhumane nature of these weapons, which are banned by the Convention on Cluster Munitions, a treaty that went into force in 2010. On December 14, Nobuyuki Hirano, the group’s president, held a press conference at the Japanese Bankers Association, for which he serves as chairman, and said, “Given the worldwide trend, we need to make our financing policy clear, and disclose it to the public, and this is not limited to cluster munitions alone.”

ICAN is expanding its activities in civil society so that the nuclear weapons ban treaty can enter into force as early as possible. Setsuko Thurlow, 85, an A-bomb survivor from Minami Ward, Hiroshima who now lives in Toronto, Canada, gave a speech at the award ceremony for the Nobel Peace Prize, and appealed to her listeners by saying, with a reference to the torch parade that took place later that evening: “Tonight, as we march through the streets of Oslo with torches aflame, let us follow each other out of the dark night of nuclear terror.”

Tor Gjerde, 68, a resident of Oslo, took part in the parade with a sign in his hand that called for his government to sign the treaty. Mr. Gjerde said that Ms. Thurlow’s speech was very powerful and made the people realize that it’s a shame that Norway, known as a humanitarian nation, has not signed the treaty, thus moving them to act. About 2,000 citizens from around the world joined the parade and chanted, “Yes, I can!” A-bomb survivors from Hiroshima and Nagasaki who were visiting Oslo as participants in a tour organized by Peace Boat, an NGO, took part in the march as well, wishing for ratification of the treaty by Japan, the A-bombed nation that has also refused to sign it.

On December 12, Ms. Thurlow held a press conference before returning home and looked back on the events in Norway, saying she was satisfied that she had made it to this milestone in the quest to abolish nuclear weapons. When someone put a necklace of paper cranes around her neck, which was made by students of Hiroshima Jogakuin University, her alma mater, she smiled and returned an encouraging message for this gift: “Please tell the people in Hiroshima that I thank them. I hope young people will follow in our footsteps.”