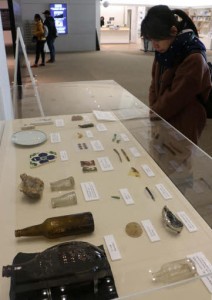 On December 21, the City of Hiroshima began exhibiting some of the artifacts excavated on the site of the main building of the Peace Memorial Museum. The exhibition, taking place in the east building, will continue through March of next year. Admission is free.

About 30 items are on display in the information lounge on the first floor of the building. Articles of daily use, including a hair clip and a toothbrush, offer a glimpse into the lives of people who lived in the former Nakajima district, which was a bustling downtown area before the atomic bomb destroyed it. Also on display are milk bottles melted by the heat of the bomb and decorative tiles. These materials convey the damage wrought by the bomb.

Atsushi Satani, 49, was visiting the museum with his wife. The company employee from Kobe said, “This makes it very real to me, how people were living their lives here. It’s like I’m looking at a page of history.”

The municipal government conducted the excavation between November 2015 and March 2017 prior to the start of earthquake reinforcement work. The amount of unearthed artifacts is equivalent to about 1,000 special containers that each measure 63 cm x 44 cm x 10 cm. The Hiroshima City Culture Foundation has been commissioned to finish classifying the discovered items by the end of March 2018.