Unearthed artifacts are exhibited at Peace Memorial Museum, convey life in Hiroshima before the A-bombing 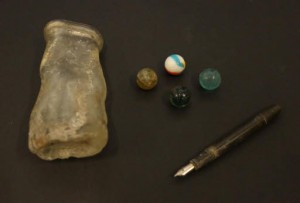 The City of Hiroshima will display some of the artifacts excavated from beneath the Peace Memorial Museum’s main building in Naka Ward from December 21 to March of next year. The exhibits include about 30 excavated household utensils, which provide clues to the lives of people in the former Nakajima district before the atomic bombing and convey the extensive damage Hiroshima suffered in this attack. The former Nakajima district, which once existed in the area where the Peace Memorial Park now lies, was a bustling commercial part of town. Admission to the exhibition is free.

A melted milk bottle and a scorched “go” stone, results of the glare of the A-bomb’s heat rays, can be seen in a special corner of the information lounge on the first floor of the museum’s east building, along with marbles, a fountain pen, a barrette, and other items common to daily life before the atomic bombing. A portion of the ground surface which existed at that time, also discovered during the excavation work, has been displayed in the same space since July.

The City of Hiroshima carried out the excavation beneath the main building between November 2015 and March 2017 in order to record any artifacts found in that location prior to the start of seismic reinforcement work. The amount of unearthed artifacts filled 1,000 special containers that each measure 63 cm x 44 cm x 10 cm.

The excavation work was extended for a year so that the geological layers that existed at the time of the Edo period (1603-1868) could be investigated. The Hiroshima City Culture Foundation has been analyzing the artifacts since April and is expected to complete their work by the end of this fiscal year. The city’s Peace Promotion Division said: “Though the analysis of the artifacts is still in progress, we decided to present some of the items to the public because the excavation took longer than we initially planned. We hope visitors will be able to feel the daily lives of the people of this area before the atomic bombing.”