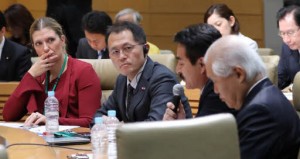 Beatrice Fihn, 35, the executive director of the International Campaign to Abolish Nuclear Weapons (ICAN), the Geneva-based non-governmental organization (NGO) that won the Nobel Peace Prize in 2017, visited Japan from January 12 to 18. This visit has sparked controversy in the A-bombed nation over the nuclear weapons ban treaty. The Japanese government has explicitly stated that it will not sign the treaty because it contends that the U.S. nuclear umbrella is necessary for Japan’s security, while ICAN is seeking to stimulate a national discussion over this perceived need for nuclear deterrence. Some lawmakers, from both the ruling and opposition parties, have begun to show a positive attitude toward studying the impact that would be produced if Japan were to join the treaty. Such developments are now prompting young people in Hiroshima and Nagasaki to take stronger action.

On January 16, a discussion was held at the Diet with government representatives and lawmakers. Senior Vice Foreign Minister Masahisa Sato rejected Ms. Fihn’s demand for Japan to join the nuclear weapons ban treaty, citing North Korea’s ongoing efforts to develop its missiles and nuclear arms. “The nuclear deterrence stipulated in the Japan-U.S. Security Treatment must be maintained,” Mr. Sato said. “Joining the treaty would undermine the validity of U.S. nuclear deterrence, which would mean that the Japanese government is permitting the lives and property of the Japanese people to be put at risk.”

Demand for discussion between the government and citizens

Seiji Imanishi, the director of the Arms Control and Disarmament Division of the Foreign Ministry, who had already spoken with Ms. Fihn in Nagasaki on January 13, made a similar argument at the Diet meeting. The A-bomb survivors and young people who participated in the Diet meeting asked Mr. Imanishi various questions, one after another, at the question-and-answer session. Ms. Fihn said that, because of the gap that exists between the government’s policies and the values and opinions of Hiroshima and Nagasaki citizens, a similar discussion should be held between the government and the public. Akira Kawasaki, 49, a member of ICAN’s international steering committee, took part with Ms. Fihn and said that this discussion over the nuclear weapons ban treaty has now begun.

Since the Treaty on the Prohibition of Nuclear Weapons was established at the United Nations last July, the Japanese government has pointed to the non-participation of the nuclear weapon states in the treaty negotiations, as well as the divisions between Japan and the treaty supporters over the process of nuclear disarmament and abolition, as the main reasons that the nation is opposed to signing it. However, political measures concerning how Japan could potentially join the treaty, along with the pros and cons of the nation’s dependence on nuclear deterrence – factors that prevent Japan from participating in the treaty – have been little discussed and it seems to supporters of the treaty that the Japanese government is seeking to sidestep this discussion.

However, as Ms. Fihn appeals for the nuclear weapons ban treaty by denouncing this dependence on nuclear deterrence as “shameful,” the Japanese government has moved to further affirm its policy of nuclear deterrence. “Is nuclear deterrence at all justifiable?” asked Mr. Kawasaki. “This question should now be discussed by the people of Japan in the form of a national debate.” Because the immorality and inhumanity of threatening to retaliate against other nations with nuclear weapons – according to Ms. Fihn, the worst of humanity, as experienced by Hiroshima and Nagasaki – and the effect that nuclear arms really have in preventing war are now being questioned, ICAN would like to stir further and far-reaching debate.

Would it not be a positive development if Japan, the A-bombed nation, joined the treaty and took the lead in the quest to realize a world without nuclear weapons? Are conventional weapons not enough to effectively prevent war? With the policies pursued by the Japanese government fanning doubts among proponents of the treaty, Ms. Fihn is urging the government to initiate a Diet-level study on the significance and impact of Japan joining the treaty and the potential paths that the nation could take. Some members of the Komeito Party and the Constitutional Democratic Party of Japan expressed support for Ms. Fihn’s request, while those from the Democratic Party suggested forming a bipartisan parliamentary group.

Ms. Fihn herself proposed the idea of Japan joining the nuclear weapons ban treaty under a security agreement that would not depend on nuclear weapons or deterrence and in which Japan would not ask the United States to use or to threaten to use nuclear weapons for this nation’s protection, while still maintaining the Japan-U.S Security Treaty. Although ICAN requested a meeting with Prime Minister Shinzo Abe to directly convey this idea to him, the Japanese government responded by saying that it was difficult to arrange a meeting with Ms. Fihn due to scheduling issues. Moving forward, the government’s stance in the future will depend on whether or not support for Ms. Fihn’s idea can grow among Diet members.

Making use of social networking sites

Ultimately, it is the public, not the government, that will determine whether or not Japan participates in the nuclear weapons ban treaty. At gatherings with young people in both Hiroshima and Nagasaki, Ms. Fihn emphasized this point and asked them to press the government and the Diet to withdraw from the nuclear umbrella and instead join the treaty. She also mentioned raising two children while pursuing her work to abolish nuclear weapons, and suggested making the most of social networking sites to convey their opinions and comments to lawmakers and expand their partnerships overseas.

Mayu Seto, 26, a resident of Higashi Ward, Hiroshima, attended the gathering that took place in Hiroshima. She said, “Ms. Fihn is very creative, positive, and energetic and she seems to have the power and influence to get other people involved in her activities.” Promoting the treaty effectively will also depend on the participation of young people who have been inspired at gatherings like these.