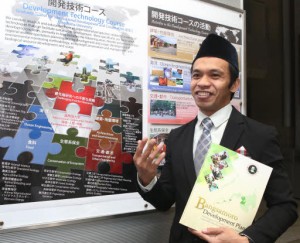 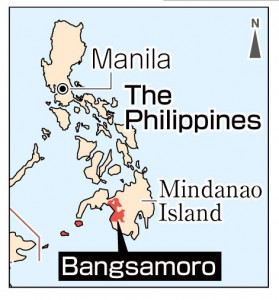 Bangsamoro is a region that includes part of the island of Mindanao and several small nearby islands in the Philippines. Ismail Guiamel, 29, a devoted Muslim, was born in this region and is now living in the city of Higashihiroshima. Since September, with the support of the Japan International Cooperation Agency, or JICA, he has been studying development technology at Hiroshima University’s Graduate School for International Development and Cooperation.

While the dominant religion of the Philippines is Christianity, a conflict between the government’s military forces and armed insurgents of the Moro Islamic Liberation Front has continued for more than 40 years. But following the signing of a peace agreement in 2014, the Comprehensive Agreement on the Bangsamoro, the region has now embarked on a new era. After graduating from a university in his homeland, Mr. Guiamel landed a job at the Bangsamoro Development Agency and decided to further his studies in Japan.

At Hiroshima University, which is involved in peace-building efforts in Mindanao, Mr. Guiamel is seeking to focus his research on renewable energy. He has a strong desire to contribute to the reconstruction of Bangsamoro by sharing the knowledge he gains in Hiroshima.

In Libutan, where his family’s home is located, gunfire was present nearly every day and night during his childhood. Recalling those days, he says that he grew up hearing the loud bangs of guns and mortars and, without realizing it, became accustomed to living amid the conditions of war. At around the age of 10, he endured a dangerous incident when he was leading cattle to pasture with his brothers and cousins and they got caught up in a gun battle. He quickly dropped to the ground, crawled forward, and eventually managed to escape. “I was so scared,” he said, remembering the incident vividly even though it took place nearly 20 years ago. After this experience, he moved away from the area and stayed temporarily with relatives on his mother’s side.

There were continuous conflicts on Mindanao Island, with its abundance of natural resources, fueled by poverty, drugs, and clashes among local residents. Roads and buildings were destroyed and many people were killed or were forced to flee from their homes. Mr. Guiamel says that he keenly understands the hardships faced by people who have lost everything and then have to live as refugees without adequate food or education. He stresses that, under such circumstances, people feel hopeless and lose their will to live.

After he began studying in Hiroshima, Mr. Guiamel came to realize that development and peace are closely connected with one another. They are inseparable in the sense that, if people aren’t happy, progress can’t be made with reconstruction efforts. Recently, he has been taking part in an increasing number of peace-related events. Last month, he was invited to participate in a “Peace Talk” that was held on Ninoshima Island, located in Hiroshima Bay. In the wake of the atomic bombing of Hiroshima, scores of injured people were taken to this island, where many of them would die. Mr. Guiamel talked about the history of the hardship and suffering experienced in Bangsamoro to the local residents and students who attended the event.

One of the elderly participants told him that the citizens of Hiroshima have long sought peace by talking about their A-bomb experiences, and expressed his hope that Mr. Guiamel and the people of Bangsamoro will convey their own experiences to their children. Ninoshima Island experienced the tragedy of the atomic bomb, but today the people there, in their towns and schools, again live normal lives. Comparing the history of Ninoshima Island with that of his hometown, where the people now await reconstruction, Mr. Guiamel said he felt that “Anything is possible.”

In Bangsamoro, the back-and-forth battles with certain radical extremists still continue, which means that the peace process has yet to be fulfilled. In December, martial law throughout Mindanao Island was extended until the end of 2018.

Mr. Guiamel plans to study at Hiroshima University for about two years and, during this time, hopes to learn as much as possible about the reconstruction process. He has vowed to do everything he can to help the people of Bangsamoro, placing a high priority on harmony and a peaceful society, regardless of religion.