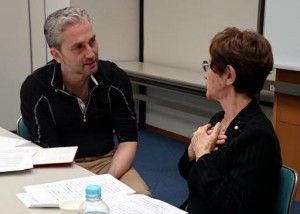 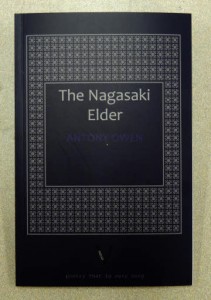 A collection of poems on such themes as peace and Hiroshima has been published by a British poet who visited Hiroshima at the invitation of a citizens’ group in the city. Antony Owen, 45, of the central England city of Coventry, writes in the book: “You never leave Hiroshima, it stays with you forever. I will always remember the forgotten.”

The A5-size book, consisting of 64 pages, is a collection of 48 poems. It opens with the words, “For all survivors.” The book includes poems that depict survivors whose family members were killed in the atomic bombings of Hiroshima and Nagasaki. The title of one of the poems, “The Nagasaki Elder,” has been used as the title of the book.

Mr. Owen visited Hiroshima in May 2015 at the invitation of the Coventry Club, which is composed of 13 Hiroshima citizens. During his visit, he met with A-bomb survivors and high school students. This experience led to the creation of his poems. He recalls, “I felt a profound duty to give a western viewpoint on an Eastern tragedy like Hiroshima and Nagasaki. I left a huge part of my heart and soul in Hiroshima after I visited there.”

Coventry suffered catastrophic damage from Nazi German air raids during World War II. As its citizens feel a strong desire for peace, the city holds an annual peace event on August 6, the anniversary of the atomic bombing of Hiroshima. The mayor and the people of the city offer paper cranes during the event.

The Coventry Club holds events to commemorate the war victims of Coventry and has had opportunities to interact with Coventry citizens. Mr. Owen was invited to Hiroshima when the club learned that he writes poems on war and peace.

Some of the poems describe what Mr. Owen actually saw in Hiroshima such as the Aioi Bridge and Honkawa Elementary School, both of which are located in the city center. Recommending Mr. Owen’s book, Hideko Okamoto, 63, who heads the group, said, “Taking in what Mr. Owen expressed in his poems, I feel that his desire for peace came welling up.”

The club holds a seminar on reading poems written in English on the second Saturday of every month at Hiroshima International House in Minami Ward. Participants can read Mr. Owen’s poems, among others. The club is inviting people to attend the seminar. For more information, contact Ms. Okamoto at 090-5267-7702.