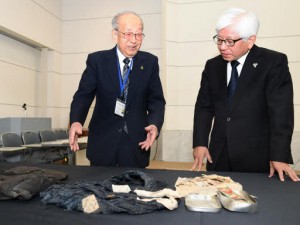 On February 5, a school uniform and four other items that once belonged to Yoko Moriwaki, who was 13 years old at the time of the atomic bombing of Hiroshima, were donated to the Hiroshima Peace Memorial Museum. Yoko, then a first-year student at First Hiroshima Prefectural Girls’ High School (now Minami High School), was killed by the atomic bomb while helping to tear down homes to create a fire lane in the city. Her brother, Koji Hosokawa, an A-bomb survivor who lives in Naka Ward, decided to ask the museum to look after these precious mementos of his sister. Mr. Hosokawa said firmly, “I would like visitors to the museum to understand that these items convey the consequences of war and I hope having them on display will encourage people to see war as something that affects their lives, too.”

When the atomic bomb exploded above Hiroshima on August 6, 1945, Yoko was working with other mobilized students in Dobashi-cho (now part of Naka Ward), about 700 meters from the hypocenter. She was severely burned by the bomb and died that night at an aid station. In 1996, Mr. Hosokawa published a book about Yoko based on the diary she had been keeping until the day just before she died. This book, titled Yoko’s Diary, generated a strong response.

Mr. Hosokawa donated Yoko’s air raid hood, handmade summer school uniform, lunch box and chopsticks, and a first aid pouch containing bandages and ointment to the museum. All of these items were presumed to have been left by Yoko at a designated gathering spot before she started working on that day. They were then found, miraculously, by Ms. Hosokawa in the burnt ruins after her death. After the war, he safeguarded Yoko’s original diary, and these mementos, at his home for many years.

Mr. Hosokawa told Kenji Shiga, the director of the museum, about his thoughts and feelings imbued in his sister’s belongings and said that his late parents had also cherished these items just as if they were a part of Yoko. He asked Mr. Shiga to keep them safe and secure for many more years to come and to make use of them to hand down the devastating reality of the atomic bomb to succeeding generations. The museum plans to include Yoko’s items in the New Collection Exhibition as well as an exhibition that will be held after the renovation work in the main building has been completed.