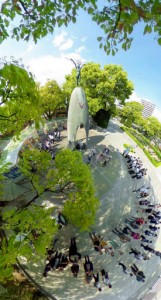 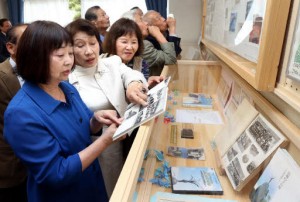 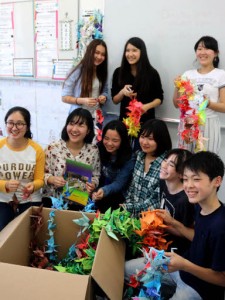 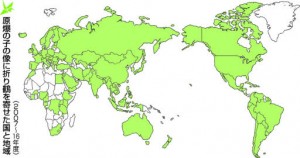 On May 5, the Children’s Peace Monument will mark the 60th anniversary since it was unveiled at the Peace Memorial Park in Naka Ward, Hiroshima. The movement which raised the monument was sparked by the appeal of former classmates of Sadako Sasaki, a girl who experienced the atomic bombing when she was two years old but later died of A-bomb-induced leukemia at the age of 12. During her time in the hospital Sadako folded paper cranes from her sickbed with the hope that her wish to be well again would be granted. After their appeal expanded the circle of support for this idea, the monument was finally realized.

Along with Sadako’s story, the Children’s Peace Monument has been known across the world for many years. In this article, the Chugoku Shimbun looks back on the history of this symbol of peace and considers the role the monument should play amid current conditions in the world, where the abolition of nuclear weapons remains a distant goal.

Monuments brings together hearts and hopes

The Children’s Peace Monument is surrounded by chains of colorful paper cranes. Here, visitors make silent prayers for peace. In addition to children coming to the monument as part of their peace education studies, many international visitors to the city visit the monument, too. Around 10 tons of paper cranes are delivered to the monument from places in Japan and abroad each year, amounting to about 10 million cranes in total. According to available records, in all, nearly 200 million paper cranes have been dedicated to the monument since fiscal year 2002.

With regard to raising the monument, the efforts made by children in Hiroshima, who went into action after Sadako passed away, were particularly important. This fact surely has great significance when thinking about the mounting calls to abolish nuclear weapons made in line with the nuclear weapons ban treaty, which was adopted at the United Nations last July.

The story of the monument began with a group of Sadako’s classmates who came together to keep up her spirits after she became hospitalized. At the time they were sixth-graders at Noboricho Elementary School (now part of Naka Ward). The members of the group pledged to continue visiting her at the hospital after they entered junior high school, but Sadako passed away in October 1955, eight months after she was hospitalized. The students then felt driven to remember Sadako in some way and they decided to raise a statue that could console her spirit and the spirits of all the children that lost their lives as a result of the atomic bombing.

Their campaign grew as students from other schools in Hiroshima also became involved. Letters and donations then arrived from throughout Japan, against the backdrop of growing public support for banning atomic and hydrogen bombs after a tuna fishing boat, the Daigo Fukuryu Maru (The Lucky Dragon No. 5), was exposed to radioactive fallout from a hydrogen bomb test conducted by the United States in 1954. At the foot of the monument is engraved the epitaph that reads: “This is our cry. This is our prayer. For building peace in this world.” This sentiment conveys the wish of the children of that time.

Soon after the monument was unveiled, the so-called “magnetic field” to pray for peace became focused on this monument and the idea has been sustained since then. Masahiro Sasaki, 76, Sadako’s elder brother, explained this aspect of the monument by saying, “This is a place where people’s hopes join together, regardless of nationality. They offer not only paper cranes, but also their hearts, to the monument.”

In June 1958, the Hiroshima Paper Crane Club was founded. The facilitator of the club was Ichiro Kawamoto (who died in 2001 at the age of 72), the man who initially suggested that Sadako’s classmates pursue a monument. Alongside children, Mr. Kawamoto continued the club’s activities like tidying up the monument area and giving paper cranes to those who visited Hiroshima from outside Japan.

Each year on May 5, to remember the efforts of the late Mr. Kawamoto, a ceremony to commemorate the construction of the monument is held. Yumi Ishihara, 18, a first-year student at Hiroshima City University, plans to attend the ceremony for the first time this year. “The presence of the monument can help enhance our connection to peace, a wish human beings hold in common,” she said.

However, because the monument has stood for 60 years, and the pedestal that supports the bronze statue of a girl is made of reinforced concrete, deterioration is unavoidable. The City of Hiroshima, which oversees the monument, has been checking its condition on a regular basis, and performing necessary repairs. But more serious maintenance measures may be needed in the future.

Satoru Ubuki, 71, formerly a professor at Hiroshima Jogakuin University and an expert on the post-war history of the A-bombed city, views the campaign to establish the monument as the first peace movement primarily pursued by children and people in education. He said, “The monument originated in Hiroshima and is known around the world. It is a source of inspiration for children in thinking about peace. The challenge is to consider what we can learn from the monument and how we can convey this to the next generation.”

The students of the sixth grade “Bamboo Class” at Noboricho Elementary School were Sadako’s classmates and they paved the way for the campaign to establish the Children’s Peace Monument. Recalling the passion they once held for this effort, they are now lending their support for the school’s new “peace resources room,” which is scheduled to open at their alma mater on May 12.

This room will display a paper crane folded by Sadako during her illness and about 20 items related to the campaign to raise the monument. Prior to the opening of the room, eight former members of the class came together. One of them, Kiyoshi Yamamoto, 75, a resident of Asakita Ward, said, “We mimeographed flyers for the campaign until late at night. We really tried our best.” Shizuko Mizuno, 75, is a resident of Nishi Ward who took part in fundraising activities for the monument almost every week. Thinking back to her experience, she said, “I would call out loudly for donations, but most of the people passing by ignored me.”

One former classmate who continues to share such memories with the public is Tomiko Kawano, 75, a resident of Naka Ward. She was Sadako’s classmate from the second grade to the sixth grade. Through her activities as a speaker, sharing her A-bomb experience, as well as her self-published book, Ms. Kawano describes how the united efforts of the “Bamboo Class” led to the establishment of the monument.

“I was afraid that I might die in the near future, too, because I had also experienced the atomic bombing, and I felt remorse over the fact that I didn’t visit her in the hospital very often after I entered junior high. So I really wanted to do something,” Ms. Kawano said. With support from businesses in Hiroshima Prefecture, she also launched a project to send free notebooks, made from recycled paper from the paper cranes offered to the monument, to elementary schools and junior high schools in other countries, among other organizations.

Hiromi Sorada, 75, a resident of Minami Ward who kept a paper crane that was folded by Sadako, given to him as a memento of her, brought that paper crane to the school as a donation. Yasushi Shimamoto, 57, the principal of the school, said, “The paper crane from Mr. Sorada is a precious item that can make our students feel that Sadako is an alumni of their school. We will inherit the will of Sadako’s classmates and continue our efforts for peace education.”

Spread of paper crane movement to the world

The Children’s Peace Monument receives paper cranes from all over the world. According to the City of Hiroshima, over the decade up to fiscal year 2016, paper cranes were offered to the monument from 113 nations and regions.

A school in Heckenbeck, Germany has sent around a thousand paper cranes, which will be dedicated to the monument in the near future. Students at the school made these cranes in response to a request from the Thousand Crane Club at Hiroshima International School, located in Asakita Ward. Members of this club learn about the origins of Sadako’s paper cranes and the campaign to establish the monument, and they bring the paper cranes they receive from other schools in the world to the monument directly.

Since the visit to Hiroshima in 2016 by Barack Obama, who was then U.S. president, the Thousand Crane Club has received many more paper cranes from other schools than before. Yuya Naka, 17, the head of the club, said with enthusiasm, “We would like to ask the schools in many more countries to send paper cranes so we can convey what really happened in Hiroshima to the rest of the world.”

Another significant fact is that people outside Japan who came to Hiroshima, the A-bombed city, and visited the monument in person have worked on activities involving paper cranes in their own locations to help promote peace in the world.

Students from the Punahou School in Honolulu, Hawaii often visit Hiroshima. Since 2013, they have been involved in the Sadako Project, where they give instructions on folding a paper crane to people visiting Pearl Harbor. Hiromi Peterson, 69, a former teacher at the school and a second-generation A-bomb survivor, said with conviction: “The paper crane has become a symbol of peace and reconciliation.”

In Brazil, Ligia Oizumi, 34, is engaged in a campaign to send paper cranes to hospitals located in war zones, among other places, with the slogan “1000 Cranes for 1 Wish.” Ms. Oizumi began this effort two years ago.

It is said that Sadako’s story first became known to the world when Robert Jungk, a journalist from Germany, published his book Brighter Than a Thousand Suns in 1958. Her story then spread further in the world with the distribution of two other books: Sadako Will Leben (The Day of the Bomb) by Karl Bruckner, an Austrian writer, published in 1961; and Sadako and the Thousand Paper Cranes by Eleanor Coerr, an American writer, in 1977.

There are also many monuments in the world that been inspired by Sadako’s story.

An attempt has also begun to connect the folding of paper cranes with the tradition of the “Olympic truce” for the Olympic Games and Paralympic Games that will be held in Tokyo in 2020. Noboricho Elementary School, Sadako’s old school, has been chosen as the kick-off venue for this endeavor. As a symbol of peace, the Children’s Peace Monument will play an increasingly important role in the future.