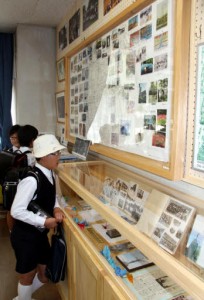 On May 12, Noboricho Elementary School, the Naka Ward school that Sadako Sasaki once attended, opened the Nobori Peace Archives to display her paper cranes, a school graduation album, and various other photos and items. Sadako was two years old at the time of the atomic bombing and died of A-bomb-induced leukemia at the age of 12. While hospitalized with her illness, she made a large number of paper cranes in the hope that this would help her recover. Sadako’s death, and her paper cranes, subsequently became the inspiration for the raising of the Children’s Peace Monument in the Hiroshima Peace Memorial Park. The school will make use of the resources in the peace archives room to teach children about peace.

Noboricho Elementary School is located about one kilometer to the east of the bomb’s hypocenter and many of its students perished in the bombing. The school renovated an approximately 30-square meter conference room and turned it into the peace archives so that students can learn about the history of the school and how Sadako spent her days there, and to think about peace-related issues.

The archives room has about 100 items on display, including a cellophane paper crane that Sadako made while in the hospital, a graduation album containing a group photo of her 61 classmates, and several photos of the school taken since its establishment in 1873. The photos of classes held outside soon after the war ended and those of the school grounds where potatoes were grown in 1944 are particularly intriguing.

May 12 was a day when parents could observe classes at the school, and Airi Okumoto, 11, a 6th grader, said, “Sadako’s paper cranes were well made and even the very edges of the paper were folded meticulously. It seems she made the cranes with a lot of intensity and passion.”

The archives are open to the public from 9 a.m. to noon on Fridays. To visit the archives, a reservation should be made in advance by calling Noboricho Elementary School at 082-221-3013 on weekdays.