Why did the atomic bomb explode 600 meters above the city of Hiroshima? 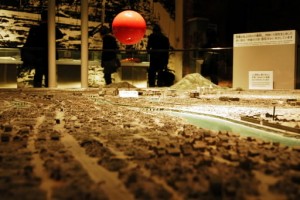 Calculation based on the force of the blast
An exhibit at Hiroshima Peace Memorial Museum explains that the atomic bomb exploded 600 meters above the ground. On the U.S. side, a copy of the military's order to attack with the atomic bomb, dated July 24, 1945, reads: "The bomb should be detonated approximately 2,000 feet above the ground." Dr. Robert Oppenheimer was the leader of the team that produced the atomic bombs. In a letter to General Leslie Groves, the man in charge of the project, Dr. Oppenheimer indicated that the optimum height for detonation is 1,910 feet (about 580 meters). Though there is a slight difference between the proposed figure and the height of the actual explosion, the facts show that the U.S. paid considerable attention to this aspect of the attack.

But what significance did the height have? I spoke with Masakatsu Yamazaki, a professor at the Tokyo Institute of Technology and an expert on the history of science who has written a book about the development of the atomic bombs.


Bomb detonated by radar
Professor Yamazaki believes the height for the explosion "was likely calculated based on the force of the blast." This is because, at the time, the force of a bomb's blast, or shock wave, was used to measure its explosive power.

According to Hiromi Hasai, professor emeritus at Hiroshima University and a longtime expert on nuclear physics, the shock wave, occurring at a height of around 600 meters from the ground, intensified in force as it rebounded off the surface of the earth. This produced an especially powerful and destructive energy sweeping over buildings on the ground.

The atomic bomb dropped on Hiroshima was probably designed to explode at the planned height through the use of radar.

A book on the history of the development of the atomic bombs, "Manhattan District History: Project Y, The Los Alamos Project," written by David Hawkins, explains that the atomic bomb was detonated in three steps. First, for the initial 15 seconds after it was released, the bomb was prevented from exploding. Second, by measuring the air pressure around it, the bomb would not explode until reaching a height of 7,000 feet (about 2,000 meters). And third, the radar mechanism gauged the distance from the ground. Among the four radar devices, when two confirmed the proper height, the bomb exploded.


Actual damage was greater than expected
Hans Bethe, a leading member of the Manhattan Project who died in 2005 at the age of 98, had been among those who predicted in March 1944 that the impact would not be as extensive as the actual damage that resulted from the attack. The prediction indicated that radioactive elements, including fragments of the atomic bomb, would be trapped in the fireball formed just after the explosion and rise up in the stratosphere, about 10~50 kilometers above the earth. These radioactive elements would disperse to a radius of at least 100 kilometers, so the scientists believed this would lessen their impact.