Monuments with the names of schools on them are a common sight near the hypocenter. Why is that? 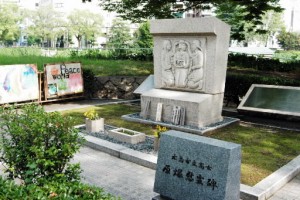 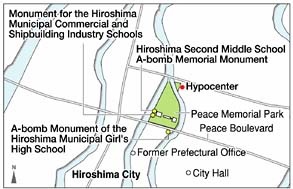 8,400 students involved in building demolition work
Many of the monuments near Peace Memorial Park are memorials to schools. But why were these monuments raised near the hypocenter and not on the grounds of these schools?

The answer to this question seems to lie in the school conditions of those days.

Children working due to labor shortage

Around the end of World War II, Japanese children didn't study in their classrooms at school all day like children today. In August 1944, an order requiring students to work was issued by the Japanese government. Children who had completed primary school were forced into "labor service" to support the military. From the end of 1944, students were involved in dismantling houses to make wider roads for fire engines and to create firebreaks that could prevent fires from spreading in the case of air raids. This was known as building demolition work.

Most adult men in their prime became soldiers and this resulted in a shortage of labor. Teens, therefore, were compelled to work.

According to Hiroshima Peace Memorial Museum, on the morning of August 6, 1945, about 27,000 junior high and high school students were engaged in building demolition work or were working in military factories. About 7,200 of these students were killed by the atomic bomb.

The students mobilized to engage in building demolition work suffered a large number of casualties. The work took place around the hypocenter, at seven spots near the former prefectural government building and the present city hall. Of the 8,400 students involved in this effort on August 6, about 6,300 died.

Near the former prefectural government building, more than 90% of the students lost their lives; near city hall, about 80% were killed. This is why the monuments for the schools are concentrated around Peace Memorial Park. The victims were of junior high school age, 12 to 14 years old.

Etsuko Kanemitsu, 78, was a second-year student at Shintoku Girl's High School and involved in the building demolition work from July 1945. She helped adults pull down the pillars of houses using rope. On August 6, she experienced the bombing while assembling at her school before they went to their work site near Tsurumi Bridge.

Taeko Teramae, 79, a third-year student at the same high school, was working as a telephone operator at the city's central telephone office, located 550 meters from the hypocenter. As she was standing in the hallway before work began, she saw the atomic bomb falling in the sky. "It looked like a chandelier," she said. "I pointed at it, wondering what it was, and then it exploded and everything went dark."

As she was fleeing east and crossing the Kyobashi River, Ms. Teramae saw a crowd of students running away from the hypocenter area. "They were students of Koryo Junior High School and present Kokutaiji High School today--and their clothes were torn and their faces were dark and dirty," she recalled.

According to a group consisting of former mobilized students, there are a total of 30 monuments in Hiroshima dedicated to the mobilized students who lost their lives. One of them is the "Memorial Tower to the Mobilized Students," located in Peace Memorial Park. Another six monuments, including monuments for Hiroshima Second Middle School (present Kanon High School) and Hiroshima Municipal Commercial and Shipbuilding Industry Schools (present Hiroshima Commerical High School), stand in the park vicinity.

Ms. Teramae lost her left eye in the atomic bombing. She continues to share her experience of the bombing because "Children were called 'little soldiers' during the war. The cruelty of children becoming victims must never be repeated." (Kensuke Murashima, Staff Writer)