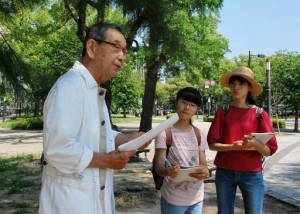 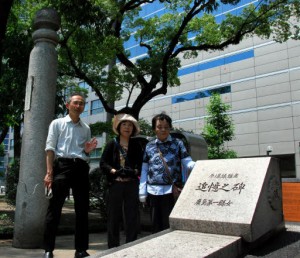 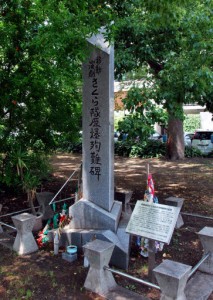 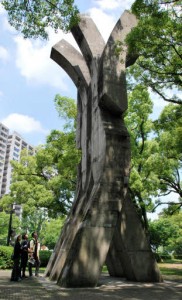 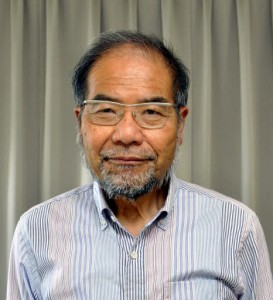 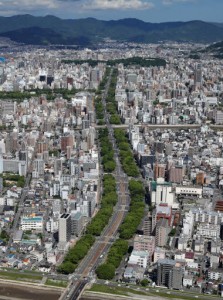 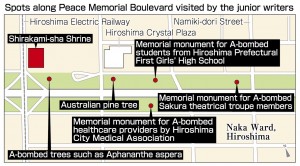 Peace Memorial Boulevard (“Heiwa Odori” in Japanese) runs east and west of the delta in Hiroshima. This main thoroughfare of the city is also known as the “100-meter-wide road.” It is filled with greenery and crosses five rivers.

Before World War II, there were several roads that connected the city from east to west. But after the Pacific War broke out and Allied air raids on Japan grew more intense, the demolition of buildings, in order to create fire breaks, resulted in vacant space alongside these roads as homes were dismantled. On August 6, 1945, the day of the atomic bombing, this demolition work was being performed that morning as usual, and about 6,000 students who had been mobilized to work for the war effort lost their lives.

In the process of reconstructing the city after the war, Peace Memorial Boulevard was created by making use of the vacant space left by the demolition work that took place during the war. Many trees were donated by the cities, towns, and villages within Hiroshima Prefecture and planted alongside the boulevard, bringing back greenery to the burnt ruins of Hiroshima. Many cenotaphs and monuments were also raised by the road, making it a place of praying for peace, as the name suggests. When you have a chance to walk by the green belt of Peace Memorial Boulevard, why don’t you slow down and look around? In this way, you’ll surely gain a deeper understanding of the history of the A-bombed city.

Today’s Peace Memorial Boulevard was created to extend through the urban area of Hiroshima, which had been turned into burnt ruins by the atomic bombing. The City of Hiroshima appealed to other local governments within Hiroshima Prefecture to donate trees for the road and many of these governments lent their support. This effort was known as the “Tree-planting campaign.”

We walked down the boulevard with Chikara Horiguchi, 73, a tree doctor who lives in Nishi Ward, and observed the trees alongside the road. We began our tour from in front of the Chugoku Shimbun building then headed first toward Shirakami-sha Shrine. Showing us a photo of the nearby area taken in the aftermath of the A-bomb blast, Mr. Horiguchi said, “When the atomic bomb was dropped, the trees were completely charred.” In the photo we saw no trace of the shrine’s pavilion for worship and prayer; only the twisted stone pillars had remained.

A big camphor tree near the shrine was scorched as well. But we were told that the tree later produced buds again amid the ruins and this gave Hiroshima citizens a hopeful sense of life being renewed. These events demonstrate how important greenery is to our lives.

Near the shrine stands an Aphananthe aspera tree, which now seems to be firmly rooted to the gorund. This tree survived the atomic bombing and Mr. Horiguchi told us that A-bombed trees have unique features such as the trunk bending toward the hypocenter or growing yellowish leaves.

Many of the trees donated through the tree-planting campaign still stand alongside the road. According to the city government, about 6,000 trees were planted by the road through the course of this campaign in 1957 and 1958. When a survey was conducted in 2015, it was found that, of the 2,200 trees that still remain, 360 were donated trees.

The Australian pine tree in front of Hiroshima Crystal Plaza is also thought to be a donated tree. There were three trees of the same species in the past, but only one tree now exists. Mr. Horiguchi said that the remaining tree had reached the limit of its life span. It is sad that the scenery we have known for so long will continue to undergo change as more and more of these trees finally die and disappear, unless something is done to address this situation.

Mr. Horiguchi stressed that we should listen to the voices of the trees. He pointed out that the trees on the boulevard have fewer leaves on the whole, as they suffer from a lack of water on the dry ground. He said, “We shouldn’t go overboard in caring for the trees, but human beings must offer them a helping hand so they can survive comfortably.”

Monuments rise as places of prayer

“Peace Memorial Boulevard is a place to pray for peace, an extension of the Peace Memorial Park,”explained Kazuhiro Tamaki, 50. Mr. Tamaki is the chair of “Hiroshima,” a group of volunteer guides to the cenotaphs and monuments raised for the A-bomb victims, which is based at the Takeya Community Center in Naka Ward. He stressed the importance of visiting these sites, saying, “I would like people to walk around the cenotaphs and monuments and try to imagine and feel the atmosphere of the area back then.” Of the 17 monuments scattered along by the boulevard, Mr. Tamaki took us to three monuments that stand near the community center.

The memorial monument for A-bombed students from Hiroshima Prefectural First Girls’ High School
This monument is found at the site of the high school that existed at the time of the atomic bombing. This is confirmed by the school’s old gatepost, which stands next to the monument. The names of about 300 students who perished in the atomic bombing, including 223 first-year students who were helping to tear down houses near Dobashi, are inscribed on the nearby nameplate. Each name stands for the life of a young person like us. (Yoshiko Hirata, 16)

Memorial monument for A-bombed Sakura theatrical troupe members
Those who were visiting Hiroshima at the time fell victim to the atomic bombing, too. Nine members of the Sakura theatrical troupe, who were touring Japan with their performance, were hit by the bombing while at their accommodations in Horikawa-cho. Midori Naka, a troupe member who died after fleeing to Tokyo, was diagnosed as the first patient in history to suffer from A-bomb disease. In 1955, this monument was erected by some volunteers from the theater world. The spot is near the troupe’s accommodations at that time. (Ryoma Iwata, 14)

Memorial monument for A-bombed healthcare providers by the Hiroshima City Medical Association
This 12-meter-high monument is in the shape of two hands placed together. It was raised by the Hiroshima City Medical Association in 1960 to console the spirits of doctors, nurses, and midwifes who lost their lives in the atomic bombing. That day more there were more than 2,000 medical professionals in the city and many of them sought to aid the injured despite the fact that they, too, were suffering from their experience of the bombing. (Felix Walsh, 15)

Interview with Norioki Ishimaru, former professor at Hiroshima University, on the history of Peace Memorial Boulevard

We heard about the history of Peace Memorial Boulevard from Norioki Ishimaru, 77, formerly a professor at Hiroshima University and an expert on the post-war history of Hiroshima.

Hiroshima originally developed as a castle town with the streets running at right angles, forming a grid. During the Pacific War, buildings were being torn down to create fire lanes along the streets from east to west. This was intended to split the urban area north and south, preventing fire resulting from air raids from spreading through the city. However, the atomic bomb turned the whole downtown area into a sea of flames.

When the plan to reconstruct the city was drawn up in the year after the atomic bombing, creating the boulevard, along with a fire lane, was included as a key measure. In addition to making the road a relaxing spot for the people of the city, it was thought that the road’s width of 100 meters or more could play an important role in fire prevention efforts. The road was then named “Peace Memorial Boulevard” in a naming contest. But the citizens of Hiroshima were not always in favor of constructing this road.

The reason for this was that some people were forced to move out of their dwellings when the road was being constructed and, at the time, there was a serious shortage of housing throughout the city. Because there was a strong call to “reduce the width of the road and building more houses,” the City of Hiroshima attempted to address this problem by building municipal housing at Motomachi, which had been military land. Meanwhile, the city planted trees and placed sculptures along the road to increase its appeal, and then completed the construction work. The full length of the boulevard opened in 1965.

The people of Hiroshima took pride in the road when the victory parade for the Hiroshima Toyo Carp took place there in 1975, the year the team won its first championship, and the Hiroshima Flower Festival began to be held along the road two years later. Mr. Ishimaru said, “Peace Memorial Boulevard was realized with the sacrifice and cooperation of the people. We should treasure it and make use of it in resourceful ways.” (Miki Meguro, 15)

What is Peace Seeds?
Peace Seeds are the seeds of smiles which can be spread around the world by thinking about peace and the preciousness of life from various viewpoints. To fill this world with flowering smiles, the junior writers—25 junior high school and high school students—choose themes, gather information, and write articles.