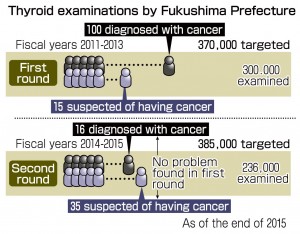 Health surveys show that at least 116 of 380,000 Fukushima children surveyed have been diagnosed with thyroid cancer. This is a far greater number compared to past studies conducted in Japan, which have found less than ten cases among one million. The surveys were carried out by the Fukushima prefectural government following the nuclear accident at the Fukushima No. 1 (Daiichi) nuclear power plant. Expert opinions are divided over the cause of this high incidence of thyroid cancer. Some argue that the health surveys have led to the early detection of cancers and the finding of benign cancers. Others point to the effects of exposure to radiation released from the nuclear power plant.

The health surveys targeted children who were 18 or younger at the time of the nuclear disaster and children who were born within a year after the nuclear accident. Now the second round of the surveys is under way. As of the end of 2015, 116 of those examined have been confirmed to have cancer. Fifty others are suspected of having cancer.

Many contend that examining those who do not have obvious symptoms, such as a nodule, has led to the detection of many cancers that will not cause death even if left untreated. They do not see these cases as connected to the Fukushima accident. This is because the amount of radioactive iodine released into the atmosphere in Fukushima is estimated to be about a tenth of that of the 1986 Chernobyl accident, and also no cancer was found among those 5 and younger at the time of the accident in Fukushima.

On the other hand, Toshihide Tsuda, a specialist in epidemiology and a professor at Okayama University, holds a different view. He said that the number of cancer cases in Fukushima exceeds the projection made by the World Health Organization and cannot be explained with conventional notions like the early detection of cancer. He pointed out that there is the possibility of a rapid rise in the incidence of thyroid cancer in the future.

An advisory committee on the health surveys will release an interim report in mid-March, in which experts have concluded that the incidence of cancer has increased by many times. But the report also stresses that the effect of radiation exposure is an “unlikely” cause, yet cannot be ruled out at this stage. The committee considers it essential to continue collecting information over an extended period of time to form a valid conclusion. It will advise that the health surveys be pursued into the future.