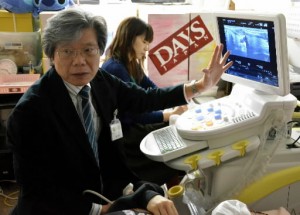 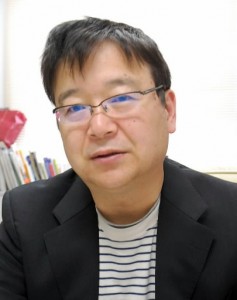 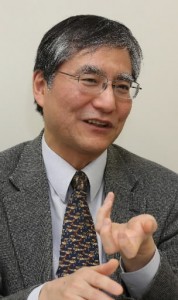 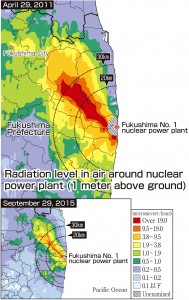 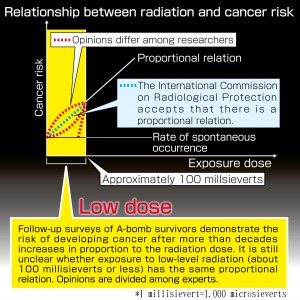 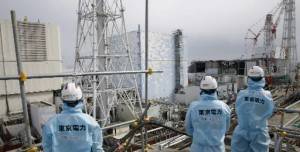 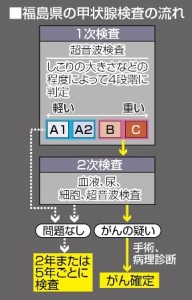 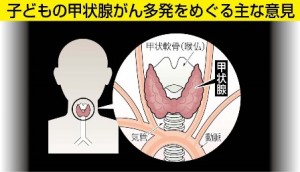 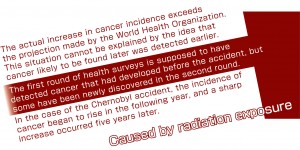 In response to the accident at the Fukushima No. 1 (Daiichi) nuclear power plant, the Fukushima prefectural government has been conducting health surveys for all its residents. Among those surveyed are 385,000 children who were 18 years of age or younger at the time of the nuclear disaster. They underwent thyroid gland inspections, and 116 have been confirmed to have cancer. Is this due to radiation exposure? Through the health surveys, it is estimated that the level of external exposure of about 99.8 percent of those surveyed was less than five millisieverts over the four months following the accident. The number of thyroid cancer cases among Fukushima children is far larger compared to past statistics, and this has stirred controversy over the so-called “gray area” of low-level exposure.


Health examinations will continue to be important in the future
Yoshihiro Noso, 65, a professor at Shimane University’s faculty of medicine, helps with thyroid examinations as a volunteer at the Iwaki Radiation Measuring Center, Tarachine, an NPO. He travels about 800 kilometers from Shimane to Iwaki, Fukushima Prefecture, once every two to three months. After one examination, he spoke to a mother and her daughter, “There’s nothing to worry about over the coming year.”

He used ultrasound to examine the throat of the 22-year-old college senior and looked at the monitor to check if there was a nodule. He inspected her throat from several different angles and explained in a kind manner, “There are no lumps that should concern you,” and, “Small lumps sometimes disappear in the course of time.” The student and her mother, 49, stared intently at the monitor. They were greatly relieved by his words and said they were glad to have come for a doctor’s verdict.

The second round of the thyroid examinations carried out by the prefectural government will end this month. The examination system is supposed to be working, but people continue to visit private medical institutions and NPOs for health checks. Why?

Professor Noso said, “It would be good if Hiroshima Prefecture could have people look at the ultrasound images and they could spend enough time communicating with the patients, but they’re short of staff.” In most of the tests provided by the prefecture, parents are not allowed to accompany their children. Also, the test results are sent by mail two months later. Even if a small nodule is detected, no care will be provided to the examinee or his or her family members unless the condition is so serious that the person needs secondary tests, including a blood test. Examinations at private institutions contribute to easing people’s anxiety.

But it is not easy to assemble a sufficient number of doctors. Tarachine made great efforts to secure an adequate number by emailing 300 doctors across the country to ask for their cooperation. Professor Noso graduated from Hiroshima University and has seen patients with thyroid cancer and other illnesses in Kazakhstan, where a nuclear test site of the former Soviet Union was located. He responded to the request, thinking that his knowledge and experience could be helpful in Fukushima.

What worries Professor Noso is people’s waning interest. At Tarachine, 3,051 people were examined between March and December 2013. The number declined to 2,428 in 2014 and 2,270 in 2015. There are also concerns that the participation rate of the prefectural government’s tests will drop. It was five years after the Chernobyl nuclear accident that the incidence of thyroid cancer in children increased. Professor Noso said, “People should really undergo these health examinations now and in the future.”

Many cancers have been detected

Radiation exposure can cause many different kinds of health concerns. After the Chernobyl nuclear accident, many people, mainly children, developed thyroid cancer as a result of their internal exposure to radioactive iodine-131. This became a grave issue. Based on this information, thyroid gland tests began in Fukushima in October 2011 in order to monitor the condition of children’s health over an extended period of time.

The first round of the surveys targeted some 370,000 children who were 18 or younger at the time of the accident at the Fukushima nuclear power plant. The purpose was to gain an understanding of any effect to children’s thyroids. But 100 of them were found to have cancer and underwent surgery by the end of 2015.

The second round of the surveys began in April 2014. Children born within a year after the nuclear accident were added to the list of examinees, bringing the figure to 385,000. The purpose of this phase of the surveys is to continue checking whether there have been any changes in the children’s thyroids. So far 16 have been diagnosed with cancer.

In the third round and beyond, tests will be conducted every two years until they turn 20, and every five years from then on. But the intervals will be considered by the committee of experts.

Toshihide Tsuda, professor of epidemiology at the Graduate School of Environmental and Life Science at Okayama University: Reason for fifty-fold increase in thyroid cancer is clear

It is clear that the higher incidence of thyroid cancer among Fukushima children can be attributed to the accident at the nuclear plant. We analyzed the health checkup data of the survey of Fukushima residents, and the first round surveys found the incidence rate in one area was fifty times higher than the national average. The second round surveys also found new cancer cases. This situation cannot be explained by the “screening effect,” which means more people suffering from disease will be found when tests are conducted on a larger scale.

From the start, the World Health Organization had predicted that the incidence of cancer would rise, but the actual increase has even exceeded its projection. In Chernobyl, the number of children with thyroid cancer started to increase in the year following the accident, then the number spiked after five years. So I’m worried about Fukushima.

But the committee overseeing the health surveys denies this connection between the higher number of cancer cases and radiation exposure. There are two factors behind this underestimation. First of all, the levels of radiation experienced by the residents are estimated at lower levels than the actual doses they suffered. Immediately after the accident, a massive amount of radioactive iodine, which affects the thyroid, was released into the atmosphere. But we have not accurately understood the levels of the initial doses of radiation because of the confusion that reigned in the wake of the accident.

Another factor is the “myth” that there will be no health concerns if the radiation dose is within 100 millisieverts. Examinations of nuclear power plant workers have made it clear that exposure to low-level radiation alone can affect human health. But in Japan, the level of 100 millisieverts is falsely believed to cause no or very little damage.

This is why people say, “This level of radiation can’t cause cancer,” ignoring the actual rise in the incidence of thyroid cancer. Then measures are not taken until it is too late. We should not rely only on radiation doses, but must focus on what is happening to these human beings and the symptoms they show.

The younger the children, the more susceptible they are to radiation. To avoid radiation exposure, different measures must be taken according to the age group. Something similar to the Atomic Bomb Survivor’s Certificate should be issued so that the residents’ health can be assessed continuously. Including those older than 18 as well as residents of prefectures beyond Fukushima are also urgent matters.

Toshiya Inaba, professor of oncology at the Research Institute for Radiation Biology and Medicine at Hiroshima University: Worried about overdiagnosis and surgery

Nodules and cysts in the thyroid are common. Small ones may disappear or become smaller. Their progression is very slow, so it isn’t too late to see a doctor after you find one. Even if one is found through concerted effort, and an operation is performed, this will not reduce the mortality rate.

We now have very sophisticated ultrasonic diagnostic equipment, and even tiny nodules can be found in the thyroid. I have been a member of the committee which discusses the health surveys of people in Fukushima since April 2015, and the committee predicted, when these surveys were begun in 2011, that many thyroid cancers would be detected. The high incidence currently seen is within the scope of that initial assumption.

Even children living in areas where radiation levels are higher than other parts of Fukushima Prefecture have not been exposed to that much radiation. After the Chernobyl accident, many children ages 5 and under developed cancer in the surrounding areas, which is unthinkable under normal conditions. But fortunately this is not the case in Fukushima.

I’m worried, rather, about overdiagnosis and surgery, which will mark children with heavy physical and psychological burdens. With the balance between health management and such burdens in mind, thyroid tests, as a general rule, should not be conducted. This is common knowledge for people working in the medical profession.

Still, it is critically important to ease the anxiety of the Fukushima people. Because the nuclear disaster in Fukushima was unprecedented, we cannot definitively say what will happen in the future. We must make every effort to continue monitoring their health conditions for a long time to come.

In that sense, I am concerned about the declining examination rate. In the case of A-bomb survivors in Hiroshima, health management has been pursued by one organization and epidemiological surveys, which explore the relation between radiation exposure and illnesses based on examination data, by another organization. On the other hand, the surveys in Fukushima are being carried out for both purposes. This makes people wonder what these surveys are for, which could make conducting future surveys more difficult. It is time that a way was found to turn the current system into something sustainable.