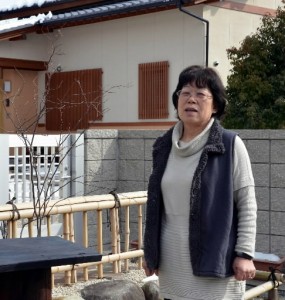 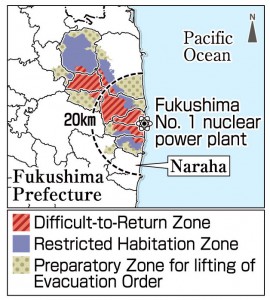 Last September, the Japanese government lifted the evacuation order for the town of Naraha in Fukushima Prefecture, four and a half years after the accident at the Fukushima No. 1 (Daiichi) nuclear power plant run by the Tokyo Electric Power Company.

Kaneko Takahara, 67, returned to her home and a peaceful life. “When I’m at home, it’s like nothing has changed at all since before the accident,” she said. The sunlight warming the living room and the view from the hill where she lives have been a familiar part of her life for many years.

But once she steps outside, the whole world looks different. Among the roughly 20 households in her area, only two families have returned. Lines of large dump trucks, undertaking the business of decommissioning a nuclear reactor, move up and down nearby Route 6, and black bags full of nuclear waste from decontamination work lie in heaps in the rice fields. The pastoral landscape has suffered drastic change.

Most of the town of Naraha sits within a 20-kilometer radius of the nuclear plant. Of the town’s approximately 7,300 residents, only about 440—six percent—have come back. The initial goal set by town leaders is for half of the population to return to Naraha by next spring.

Hiatus of four and a half years

The radiation levels once reached an average of 0.30 microsieverts per hour at residential areas in the town of Naraha. With the passing of time, and the decontamination efforts, the level of radiation dropped by 59 percent. The level now approaches 1 millisievert of additional radiation exposure per year, which the Japanese government views as a longer-term goal. Discussing this state of affairs, Yukiei Matsumoto, the mayor of Naraha, said, “Still, we can’t shake off our fear of radiation because we had to flee from here after the accident at the nuclear power plant.”

Ms. Takahara, who returned to her home earlier than others, opened a café at her home. Residents drop by, but one person declined to drink her coffee, saying, “If it’s made with water from Naraha, I don’t want to drink it.” An elderly person said in tears, “My family is keeping me from returning to Naraha because they don’t want me to live alone.” Ms. Takahara believes that if their life as evacuees had been shorter, the situation would be different, and she feels bitter toward the radiation which forced the residents to stay away for four and a half years.

At the end of last year, when the residents began returning home, one development shocked the returnees. The neighboring town of Tomioka was approved as the final disposal site for radioactive waste. The Japanese government plans to dispose of sludge and ash found in Fukushima Prefecture, with levels of radioactive cesium of 100,000 becquerels per kilogram or less, at this site. But the waste will be transported along a route through Naraha.

At a town meeting held in February for evacuees living in the Tokyo metropolitan area, one man, 66, whose home stands alongside this route, said, “I don’t feel like going back. The town government has abandoned us.” Ms. Matsumoto did her best to persuade the former residents to return, telling them, “The site will no doubt be a nuisance to us, but it has to be situated somewhere.”

The people of Naraha were forced to flee in desperation when the accident occurred at the nuclear power plant, and now they suffer new distress in connection with their hope of returning home. Ms. Takahara will continue to run her café and listen to the voices of residents who come by. She said, “The accident won’t be over until everyone feels happy again, whether or not they return home.”