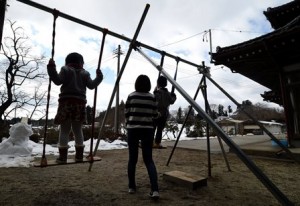 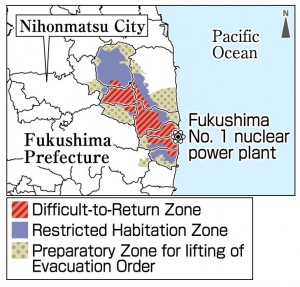 With a gentle gaze, a 41-year-old homemaker in Nihonmatsu, Fukushima Prefecture, watched over her children as they ran about joyfully in the yard. Reflecting on the past five years, she said with deep feeling, “I’ve finally come to a compromise after gradually loosening the restrictions I put in place.”

Her house is located in the southeastern part of the city, about 40 kilometers as the crow flies from the Fukushima No. 1 (Daiichi) nuclear power plant. But with the 1,000-meter peaks of the Abukuma Mountains between them, she had never been concerned about the nuclear plant prior to the accident. The disaster took place about two weeks after her son, her second child, was born. She did not know much about radiation and wondered, “Will I lose my hair if I get caught in the rain?” Compounding her more delicate condition after childbirth, her heart was filled with anxiety and fear.

First, she decided to keep her daughter, who is one year older than her brother, from playing outdoors. On weekends, she and her husband, 56, would take their daughter outside of the prefecture. But the little girl did not like the grass, complaining that it felt scratchy, and toddled out onto the gravel road instead. The mother was concerned, thinking that this may have resulted from spending most of their time indoors. Still, she did not want her daughter to be exposed to any additional radiation. She felt she had no choice but to keep her inside, hoping that the little girl would be patient.

She had felt shackled by all the advice she heard about actions to take and to avoid, but her feelings eased after she began attending seminars on radiation held by the municipal government. Under the guidance of Shinzo Kimura, an associate professor at Dokkyo Medical University, she borrowed a dosimeter and measured the radiation levels of literally everything, from food to clothing. Professor Kimura is serving as an adviser on radiation to the municipal government.

She lives with her in-laws and measured the radiation levels of the vegetables from their field. She found that they registered 5 becquerels per kilogram, which is one-twentieth of the safety limit set for food (100 becquerels per kilogram.) The homemaker and her children had been eating vegetables that she bought from other prefectures through a mail order service, but the vegetable were not fresh. She said, “I made many calculations in my head and decided that we should eat fresh vegetables. It’s good that I’ve found a compromise.”

She began allowing her children to play in their yard after the decontamination of their house was finished in the summer of 2013. After the decontamination work, the radiation level went down from 0.63 to 0.15 microsieverts per hour. First, the children were permitted to play outdoors for half an hour. Before entering the house, she had them change their clothes at the entrance. Then, little by little, she relaxed her rules. Now they can play outdoors as much as they like as long as they thoroughly wash their hands.

But she still brings the dosimeter with her when she takes her children to a new place. Once, when her daughter’s friend approached a ditch, her daughter said to the friend, “Don’t go there. There’s radiation.” Her words created an uncomfortable moment.

The mother said, “I’m well known at the kindergarten because of my attitude toward radiation. My daughter will enter elementary school in April, and, more and more, she will have to be part of the group. I have to rethink the rules.” People have different ideas about radiation. She believes that once she has decided to stay where she lives for the rest of her life, she must be strong and make her own judgments. Her smile conveyed her determination.

Standard limit for food items
Following the accident at the Fukushima No. 1 (Daiichi) nuclear power plant, the Ministry of Health, Labor and Welfare set standards, for the first time, on whether or not domestic food items could be shipped for consumption. The provisional limit for cesium in vegetables, for instance, was set at 500 becquerels per kilogram soon after the accident. The standard was then tightened to 100 becquerels per kilogram in 2012. If the maximum amount is continuously consumed, the greatest annual radiation dose is estimated to be 0.7 millisieverts.