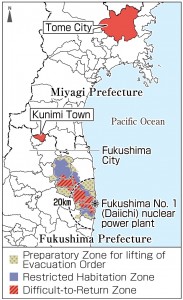 Saying, “These papers can link Fukushima and me,” one housewife, 40, opened newsletters and local newspapers from Fukushima Prefecture at a municipal housing site in Takahashi, Okayama Prefecture, where the city center lies between mountains. The papers bear the word “reconstruction.” As part of support measures implemented by the Japanese government, these papers reach her each month with information on current conditions. She went on to say, though, that recently, “I haven’t been reading them much.”

Five years ago when the accident occurred at the Fukushima No. 1 (Daiichi) nuclear power plant, run by the Tokyo Electric Power Company, she was living with her husband, 41, and two children in the town of Kunimi, about 65 kilometers from the nuclear plant. Although she was worried about the exposure to radiation, the elementary school her eldest son attended “allowed the students to play outside as usual.” Officials at the local government where they lived repeated that there were “no problems.” As a result, she felt that only parents would be able to protect their children. Her husband shared the same sentiment and found work in the city of Takahashi, where they evacuated seven months after the accident.

Five months after they left, the shiitake mushrooms grown in the garden of her parents’ house in the city of Tome, Miyagai Prefecture, about 150 kilometers north of the nuclear plant, exceeded Japan’s standard of 100 becquerels per kilogram for food products. She made the final decision to raise her children in Okayama, because radiation doesn’t stop at the border of Fukushima Prefecture.

But she was worried about their house left behind in the town of Kunimi. Her parents regularly visited it, as caretakers, and she sensed that they hoped her family would eventually return. She also sensed her husband’s longing for Fukushima, who dreamed of bringing the family back after the children had grown.

A turning point came last year. The Fukushima prefectural government announced that it would discontinue free housing for voluntary evacuees across Japan at the end of March 2017. In her family’s case, although the City of Takahashi began providing them with this assistance in the middle of their evacuation period, they will be treated the same as other residents of the city. Because paying rent in Okayama, while continuing to pay down the mortgage for their house, would be difficult, they finally came to the conclusion that they would sell their home.

There is a growing trend urging evacuees across the nation to return to Fukushima, with assurances that radiation levels have dropped. Emblematic of this effort is the ending of assistance programs for voluntary evacuees.

Noriko Sasaki, 44, the vice chair of a group called “Hiroshima Hinansha no Kai Asuchika,” composed of evacuees to Hiroshima from the Great East Japan Earthquake, said, “Many of our members don’t have stable livelihoods. They tell me that they’re worried about the situation when they’re still trying to make a go of their new lives at the places to which they evacuated.”

She continued, “I sometimes think, in 10 or 20 years, I might look back and wonder why I carried on with our lives as evacuees...but then I think of my children...” She said that some members have begun to consider moving inside the city of Hiroshima to ease the burden of rent.

The members of the group want people around them to understand their situation. But Ms. Sasaki shakes her head, knowing this is no easy task, whenever she sees online comments which claim that voluntary evacuees have received a huge amount of financial assistance, which is contrary to fact.

These voluntary evacuees are people who were living just outside the evacuation areas, the boundaries drawn by local governments. They dream of living more peaceful lives, if only a little. But they now face a turning point in this desire.

Voluntary evacuees and housing assistance
The Fukushima prefectural government has been providing public housing for free for voluntary evacuees from the prefecture if they meet certain conditions. The prefecture has been implementing this measure by making use of private housing as well. However, the prefecture plans to end this assistance at the end of March 2017 and instead provide a subsidy of one-half (up to 30,000 yen) for the first year and one-third (up to 20,00o yen) for the second year for low-income households and single-female-parent households who continue their status as evacuees.