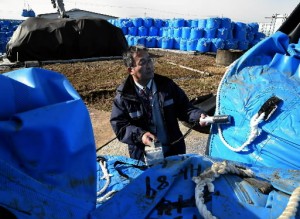 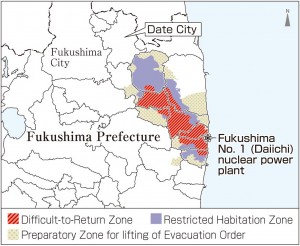 As I drove through peach orchards that sprawled across the city of Date in Fukushima Prefecture, I abruptly came upon steel-plate walls around 2.5 meters tall. Inside these walls are piles of roughly 3,000 blue bags. This is an interim storage space for temporarily keeping waste from decontamination work, including dirt, branches, and leaves. There are reportedly 104 interim storage sites around the city.

Takahiro Hanzawa, 58, chief adviser in the Radiation Control Office in the city of Date, was my guide. “No other municipality has been able to create as many interim storage spaces as we have here,” he said proudly. After the accident at the Fukushima No. 1 (Daiichi) nuclear power plant, Date developed a roughly 24.9 billion yen contamination plan in fiscal year 2012. The city sought to reduce the population’s exposure to radiation as much as it could, progressing ahead of other municipal governments in Fukushima Prefecture.

The biggest bottleneck for the decontamination process involves locating a destination for the waste from the decontamination work. In other municipalities, residents must still tentatively store such waste in their yards or garages, because the municipal governments were unable to secure interim storage spaces.

The decontamination work in Date was completed at the end of fiscal year 2013. The effort there drew attention as a successful example of gaining the understanding of residents in regard to radiation and averting unnecessary exposure as swiftly as possible.

At the same time, some citizens feel deeply concerned about the potential for radiation exposure. Miho Sugiura, 38, is the chair of a grassroots group in Date that was formed in December of last year. “If the town office won’t change its criteria for decontamination, our only option is to do the decontamination work on our own,” she vowed. However, she still wonders why her city isn’t implementing the same kind of decontamination work being undertaken in other towns.

Opinions are now split between the local government, which took the lead in carrying out decontamination work, and residents of the area, who still worry over the situation when they compare the conditions in their town to those of other communities. How this problem will be resolved remains to be seen.

Decontamination work
Such work involves removing radioactive materials from soil and buildings by taking away topsoil or wiping off building surfaces. For evacuation areas near the Fukushima No. 1 (Daiichi) nuclear power plant, the decontamination work is implemented by the national government. For places like the city of Date, where a level of over 1 millisievert of additional radiation per year is observed, local municipalities are responsible for undertaking this work, following their designation as an “Intensive Contamination Survey Area” by the national government. The Act on Special Measures Concerning the Handling of Contamination by Radioactive Materials, which has defined the framework of decontamination, stipulates that all costs incurred in relation to decontamination work shall be covered by the Tokyo Electric Power Company.