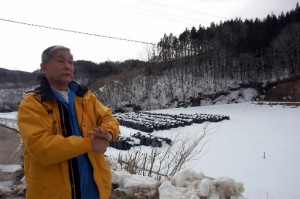 Seventy-five percent of the town of Iitate, in Fukushima Prefecture, is covered with forest. When the Fukushima No. 1 (Daiichi) nuclear power plant became the site of a nuclear disaster in March of 2011, the residents of the town were forced to evacuate. By this spring, though, the evacuation order will be lifted in areas apart from the “Difficult-to-Return Zone.” With efforts to decontaminate the forest intending to ensure the safety of those who will return, hopes for the decontamination work are high.

At the same time, there is continuing anxiety. Nobuyoshi Ito, 72, the manager of an agricultural training center in the town, has been carrying out measurements of the radiation levels in the forest. He has found levels of 3,047 becquerels in bracken and 3,481 becquerels in ostrich fern. The radiation levels found in tree bark are also high. Based on these measurements, Mr. Ito is opposed to the idea of the evacuees returning. He said, “The nuclear accident has deprived us of the lives we led, coexisting with the forest for many generations.”

Frustrations of those within 20 kilometers of nuclear plant

The situation is even more difficult for the people of areas where the lifting of the evacuation order remains uncertain. In the town of Miharu, located about 50 kilometers west of the nuclear power plant, the Futaba forestry cooperative’s temporary office is housed in a prefabricated building. Before the nuclear accident, the cooperative’s head office was in the town of Tomioka, six kilometers south of the nuclear plant and sitting in a “Difficult-to-Return Zone.” The forest surrounding the temporary office is a “foreign place.”

“There were areas where new trees had just been planted. Without proper care, they will die. By now, they’re probably suffocating in weeds,” said Kimio Akimoto, 68, the head of the forestry cooperative, pointing to a map which shows the area that falls within the cooperative’s jurisdiction. The area encompasses eight towns and villages including Futaba and Okuma, where the nuclear power plant is located. Forestry operations are permitted only in limited areas more than 20 kilometers from the nuclear facility.

When it comes to transporting logs, Fukushima Prefecture has set a standard limit for the radiation level in the air. Within the evacuation zone, many areas exceed this limit. “Although the evacuation order has been lifted in a growing number of zones, it will be a long while before we’re asked to resume the work of managing the national forests,” said Mr. Akimoto. “Some forestry workers are evacuees, forced to leave their jobs behind, and are now preoccupied with making a living.”

Border zones to be decontaminated

Last December, a committee of the Ministry of Environment crafted a policy in which forests that are far from human habitation are excluded from the scope of the decontamination work. This decision has stirred worry among those involved in the forest industry in Fukushima Prefecture.

In response, the Fukushima prefectural government and the prefectural assembly urged the ministry to reconsider the policy. As a result, the Ministry of Environment agreed to reinstate the satoyama areas, or the border zones between mountain foothills and flat land.

“It will take more than 100 years to completely decontaminate the forest in Futaba,” said Mr. Akiyama, speaking frankly. “The local people understand the satoyama boundaries best, so the central government should consult with them when considering the decontamination work.” He also stressed the importance of pursuing measures to minimize people’s exposure to radiation as the work in the forests takes place.

It will be some time until the people of Fukushima are able to regain the livelihoods that were lost due to radiation. Their struggle will go on against an invisible menace that has penetrated deep into nature itself.