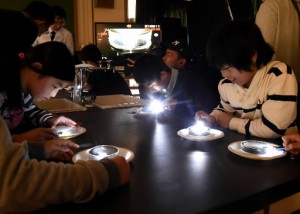 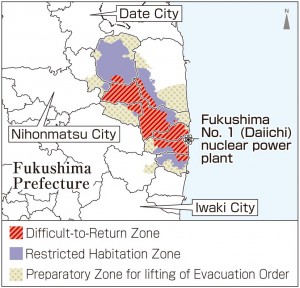 Fukushima after five years: Teaching and learning about radiation in the classroom
by Jumpei Fujimura, Staff Writer

In the darkened classroom, a student cried in a high-pitched voice, “Oh, I see it!” It was a special science class held at Onahama No. 1 Elementary School in Iwaki City, Fukushima Prefecture. About 60 fifth-graders produced a mist chamber using dry ice and alcohol, and observed that a small amount of radiation passed through the chamber like a vapor trail.

Hisashi Tamura, 60, the principal of Onahama No. 1 Elementary School and a qualified teacher of high school science, wore a white coat as he led the class. Mr. Tamura also explained the numbers shown on the radiation monitoring post, found on the school grounds, and said, “Radiation was scattered here, in Iwaki, when the nuclear accident happened, but there is nearly no radiation observed now.”

Two students from Yamazato Elementary School in the city of Nagasaki, who were present as part of a student exchange program run by Fukushima Prefecture, took part in the class, too. Yamazato Elementary School is located about 700 meters from the hypocenter of the Nagasaki A-bombing. Because around 1,300 people were killed at the school in the atomic bombing, the school is now focused on peace education. For the exchange program, arrangements were made for students from the Nagasaki school to experience a radiation education class at a school in Fukushima Prefecture.

Kenji Yoshimoto, 56, the principal of Yamazato Elementary School, accompanied the students on their visit. Speaking candidly, he said, “In A-bombed places, people tend to fix from the start on how frightening radiation is. But it’s important for us to be willing to look at it squarely and learn more about it.” After observing the students at the Fukushima school learning about radiation first-hand, as a topic that touches their lives, Mr. Yoshimoto said, “I’d like my students in Nagasaki to think about this subject more deeply.”

In line with the revised curriculum in Japanese schools, the topic of radiation was restored after an absence of 30 years and has been a part of classroom learning, in a unit on “energy resources,” since fiscal year 2012. Amid preparations for introducing the new curriculum, the accident occurred at the Fukushima No. 1 (Daiichi) nuclear power plant. In Fukushima Prefecture, all elementary schools and junior high schools now pursue a program of radiation studies. A variety of topics concerning radiation are covered in the program, including not only the characteristics of radiation, but also methods to prevent radiation exposure, food precautions, and decontamination work.

Focus differs depending on municipality

However, a closer inspection of the supplementary reading materials, which have been developed by the board of education in each municipality, reveals differences in how the topic of radiation is taught. Such differences reflect the differing attitudes of the experts who serve as advisers for each board of education.

For instance, the city of Date focuses on explaining decontamination work and water quality inspection, activities particular to the city, in about half of the pages in its supplementary reading material. This material concludes that going outdoors and engaging in exercise, without excessive fear of radiation, is important. On the other hand, the supplementary reading material of the city of Nihonmatsu describes the reality that radioactive substances will continue to emit radiation over the next several decades. It also emphasizes the fact that it’s not unusual for there to be differences of opinion about radiation.

Current science is unable to yet clearly determine the effects of exposure to low levels of radiation. Mr. Tamura, as a teacher, believes that the truth could lie in both points of view, but feels that it would be wrong not to pursue teaching and learning about radiation in schools because these effects are not yet well understood. When his students travel outside Fukushima Prefecture in the future, they might be asked about the effects of radiation back home. Mr. Tamura hopes that they will speak up and express their opinions with others on these occasions, rather than hesitating to share their perspective.

Radiation studies
In line with revisions to the Japanese school curriculum in 2008, radiation studies were restored in a unit of ninth-grade science since fiscal year 2012. Though the original idea was to teach about the characteristics of radiation and its applications, this direction was modified following the accident at the Fukushima No. 1 (Daiichi) nuclear power plant. Education on radiation now also looks at the damage of the nuclear accident, and the effects of radiation, along with ways to prevent prejudice and discrimination due to radiation exposure.