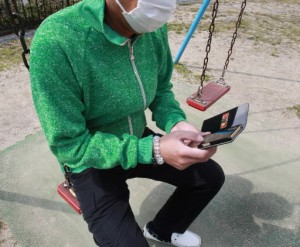 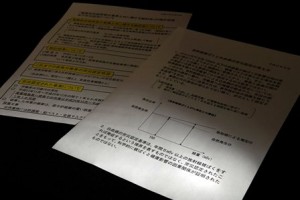 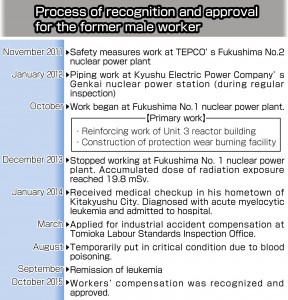 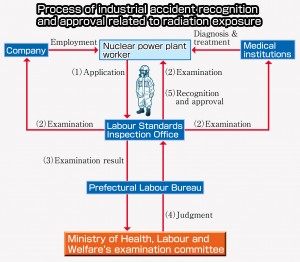 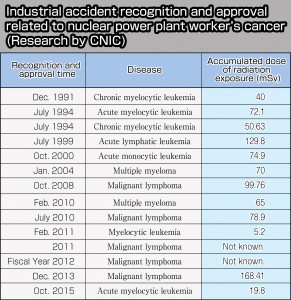 An industrial accident claim was recognized and approved last October for a former worker at the crippled Fukushima No. 1 (Daiichi) nuclear power plant, operated by the Tokyo Electric Power Company (TEPCO). The man, 41, a resident of the city of Kitakyushu, was employed at the plant after the nuclear accident occurred and developed acute myelocytic leukemia. This is the first case in which an industrial accident claim has been approved for radiation exposure involving this nuclear accident.

The man’s accumulated dose of radiation exposure was 19.8 millisieverts. This level exceeds 5 millisieverts, the standard for recognizing and approving a link between an industrial accident and leukemia, but is still well below 100 millisieverts, which is considered to be connected to an increased risk of cancer. As a result, the Ministry of Health, Labour and Welfare released the unprecedented statement that the causal relationship between radiation exposure and its health effects has not been scientifically proven. A so-called “gray area” of low-level exposure is showing some effects on the workers engaged in decommissioning efforts at the nuclear power plant.

“If there had been some explanation about the risks…,” said the man.

The former worker at the nuclear plant agreed to be interviewed by the Chugoku Shimbun. He said that the diagnosis of leukemia was completely unexpected and he spent many days worrying over the possibility that he would die. During the interview, he insisted that a more detailed explanation should be given to workers about the risks of radiation exposure before they begin working, and called for claims to be smoothly recognized and approved, and compensation provided, if a worker develops an industrial accident-related disease.

The man was an employee at a welding company in Kitakyushu. After working at the Fukushima No. 2 (Daini) nuclear power plant and the Genkai nuclear power station (in Saga Prefecture), run by the Kyushu Electric Power Company, he labored at the Fukushima No. 1 nuclear power plant for about one year and one month starting in October 2012, thinking that his spirited commitment could be of real help to the areas and people affected by the disaster. He was assigned to work at reinforcing the Unit 3 reactor building that was on the verge of collapse due to the hydrogen explosions it had suffered. In many of these locations, workers could be on the job for only 20 minutes a day because of the high levels of radiation exposure.

Thinking back to those days at the plant, the man said that struggling with illness was extremely difficult, yet he felt fortunate that the diagnosis had been made early. In January 2014, in the month after he returned to his hometown from the nuclear plant in Fukushima, he underwent a medical checkup. The results indicated that he had developed acute leukemia. He was soon admitted to a hospital and began receiving treatment to fight the cancer.

The side effects of the drugs he must take led to a period of 10 days where he suffered terrible diarrhea, with as many as 40 trips to the bathroom each day, and a fever of over 40 degrees Centigrade. Morphine was needed to control the pain and sleeping medication left him bedridden. One day, while he was half conscious, an employee of the main subcontractor for his work visited him at the hospital and said that his illness may have been the result of exposure to radiation.

At first, the man didn’t reflect seriously on his visitor’s comment, but in March 2014, while he was still in the hospital, he managed to apply for worker’s compensation with the support of the original contractor and others. Then, in October 2015, a year and a half after his application, he received word from the Ministry of Health, Labour and Welfare that his claim had been recognized and approved. This is when he first realized that his illness had been caused by an industrial accident.

He now feels that he lacked knowledge about radiation despite his experience working at other nuclear power plants. Though he received some training about radiation protection before beginning this work, he was never told about workers’ compensation, in the event of an accident, or the related insurance policy. While he had known that working at a nuclear plant was risky, he had always taken this risk of exposure lightly. The man now thinks that no one should risk their life at a nuclear power plant, where workers are inevitably exposed to this invisible risk, without a clear understanding of the potential consequences.

After his claim for workers’ compensation was accepted, he was astonished at the unexpected outcome. Before he developed leukemia, he had purchased an insurance policy to cover accidents. At the time, he was told by the person overseeing this policy that if an industrial accident is recognized and approved, he would be compensated by the insurance policy. Afterward, however, that person told him to read the terms of the policy carefully. When the man read the detailed terms and conditions, he learned that insurance payments would not be granted in the event of war, upheaval, or contamination from nuclear fuel materials. He discovered that he had been working at a nuclear power plant without the minimum knowledge concerning his safety.

The long period of time he was forced to wait to hear about his application for workers’ compensation was also a heavy burden both mentally and physically. In his case, he felt fortunate to have a certain amount of savings, which helped. But if he hadn’t, the situation would have been even more difficult. He said strongly, “The ministry has set a clear standard for recognition and approval, so they should be responsible for making a prompt decision. Under the current conditions, there won’t be any increase in the number of people willing to engage in the decommissioning work.”

According to TEPCO, the number of personnel that have worked at the Fukushima No. 1 nuclear power plant since the accident totaled 46,758 by the end of February 2016. Their average accumulated dose of radiation exposure is 12.75 millisieverts. The radiation exposure of 22,285 workers, approximately 48% of the total, exceeded 5 millisieverts, while the radiation level of 174 workers exceeded 100 millisieverts, the limit considered to be associated with an increased risk of cancer. Even so, the applications for workers’ compensation related to cancer, including leukemia, have so far amounted to only nine. Three applications were not accepted and one applicant withdrew his application. Four cases are now under review and there has been only one case that has been recognized and approved, that of the worker who responded to this interview.

After four anticancer drug treatments, he was pronounced “in remission,” meaning that no cancer cells were detected. The man now refrains from hard work and undergoes a medical examination every three months. He fears a recurrence. But at the same time he remains concerned about the workers who have been exposed to even higher levels of radiation. He believes that these workers are unfamiliar with the workers’ compensation system, or even if they are, they may give up pushing through their applications during bouts of illness.

Comments by Ministry of Health, Labour and Welfare are criticized

With regard to recognizing and approving industrial accidents for work performed following the nuclear accident at the Fukushima No. 1 nuclear power plant, there has been ongoing debate over documents released by the Ministry of Health, Labour and Welfare. Industrial accidents are recognized and approved only after a correlation is found between illness and work. The ministry, however, has argued that a causal relationship between radiation exposure and disease has not been proven. In response, some civil groups are urging the ministry to retract this statement, saying that it will spread false perceptions.

The ministry released these documents as a supplementary explanation when it announced that the first industrial accident claim had been recognized and approved. The documents cite the standard for leukemia then insist that the risk of cancer caused by low-level exposure to radiation of less than 100 millisieverts is much smaller than the risk from other factors. The documents also state that an annual exposure to radiation of 5 millisieverts or more, which is the recognition and approval standard for leukemia, is not the limit for developing this illness, and that the causal relationship between radiation exposure and health effects has not been scientifically proven.

In response, the Japan Occupational Safety and Health Resource Center (JOSHRC), which supports workers at the nation’s nuclear power plants, views the explanation provided by the ministry as problematic. JOSHRC says that the ministry’s comments give the impression to the public that such recognition and approval has, at this point, no scientific basis and it urged the ministry to withdraw these documents in a letter of petition submitted to Yasuhisa Shiozaki, the minister of Health, Labour and Welfare, on March 30. The Citizens’ Nuclear Information Center, a non-profit organization, and the Japan Congress Against A- and H-Bombs (Gensuikin) also signed a letter of petition and urged the ministry to withdraw the documents and provide further explanation.

Katsuyasu Iida, the vice secretary of the Japan Occupational Safety and Health Resource Center, stresses that pneumoconiosis and asbestos are recognized and approved as industrial accident diseases from the causal relationship between workplace and illness. He says that while the ministry is granting recognition and approval based on its own standards, it demonstrates uncertainty regarding the causal relationship, and points out that the ministry’s stance is a complete self-contradiction.

The Tokyo Electric Power Company has posted the explanation given by the Ministry of Health, Labour and Welfare on its website for the Fukushima No. 1 nuclear power plant workers and their families, and emphasizes that the ministry’s explanation corresponds with its efforts to ease anxiety.

With respect to the reason for preparing the supplementary documents, the ministry says, “This is a matter of high public concern. And for those citizens who are concerned about radiation, it was necessary to provide an explanation that could be easily understood.”

Recognition and approval standard for leukemia

1) Annual exposure to radiation: 5 millisieverts or higher
2) Period of onset: One year after radiation exposure

As to the reasoning behind setting the exposure level to 5 millisieverts or higher for leukemia, the Ministry of Health, Labour and Welfare said that the meeting documents from that time were dispersed and lost and the details are not clear. On that basis, the ministry concludes that the recognition and approval standards were established based on exposure limits for the general public (residents) recommended by the International Commission on Radiological Protection (ICRP) at that time. The ministry assumes that there is little basis for determining any other reasoning.

Recognition and approval of industrial accidents is usually determined based on the results of an examination by the relevant Labor Standards Supervision Office to which a worker applies. With respect to radiation exposure, however, recognition and approval is determined by an investigative committee composed of medical experts from the Ministry of Health, Labour and Welfare. This is because (according to the ministry) the effects of radiation on human beings have not yet been established. The investigative committee examines and discusses the conditions of exposure and the potential for the onset of viruses and hereditary effects.

For other cancers, the same committee has also discussed the recognition and approval standard since the nuclear accident occurred. For six cancers, including stomach, esophageal, colon, bladder, throat, and lungs, the ministry presented “a view on industrial workers’ compensation,” under which recognition and approval for these six cancers are comprehensively determined based on the following three requirements: 1) the accumulated dose of radiation exposure totals 100 millisieverts or higher; 2) the period from exposure to onset of cancer totals five years or longer; and 3) it is highly unlikely that factors other than radiation exposure are the cause of cancer.