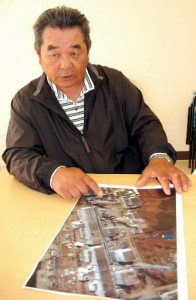 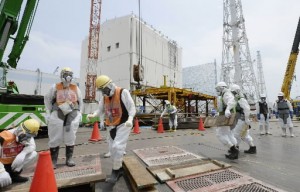 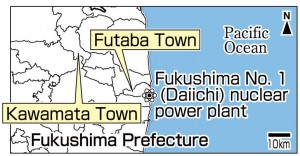 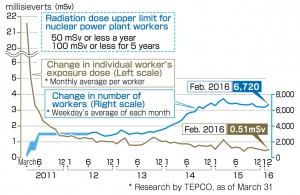 At the Fukushima No. 1 (Daiichi) nuclear power plant, operated by the Tokyo Electric Power Company (TEPCO), an average of 6,000 to 7,000 workers are engaged in decommissioning work each day. In the immediate aftermath of the nuclear accident, their work was continuously fraught with the dangers of radiation exposure. Measures to reduce radiation levels have advanced since then, and five years after the disaster, there is no longer the need to wear full-face masks in most areas of the power plant. However, the most difficult and unprecedented task of removing the melted fuel (the fuel debris) still lies ahead. It is estimated that the decommissioning work for the reactors will take 30 to 40 years to complete. Thus, workers at the crippled power plant will continue their long-term struggle against the risk of exposure to radiation.

“I don’t want to work at nuclear power plants anymore.”

“I had worked at nuclear power plants for about 20 years. But that was the first time I feared for my life,” said Kazuo Okawa, 61, a former veteran worker at nuclear plants. He began working at the Fukushima No. 1 nuclear power plant in April 2011, 20 days after the Great East Japan Earthquake. He is one of the workers who witnessed the catastrophic state of the accident site first-hand.

Mr. Okawa’s home is in the town of Futaba, approximately three kilometers from the nuclear power plant. He was originally a carpenter and was engaged in work involving air conditioning equipment as an employee of a subcontractor. In March 2011, his life was turned upside down when he and his wife first fled to the town of Kawamata, Fukushima Prefecture, then moved to the city of Saitama before finally settling in the school building of a closed high school in Kazo, Saitama Prefecture. His only possessions in hand were a few pairs of underwear and a blanket.

Not long after that, he was told by a person connected to the company he had previously worked for that the nuclear plant needed workers. This request came from someone who had been of helpful support to Mr. Okawa. So he decided to return to Fukushima.

Mr. Okawa’s work involved installing a device to remove vapor from the waste material disposal building located near the Unit 4 reactor. A large amount of water, which was poured into the reactor to cool it down, had entered this building and, as a result, the water and the high-level radiation it contained had accumulated in the building in the form of vapor. If the water had been left in that state, it was very likely to cause a hydrogen explosion. This was the explanation given at his work site.

At the Unit 4 reactor, the building’s iron framework was exposed and the reactor was in a decrepit state. Although he was instructed not to go near debris containing high levels of radiation, such debris was scattered all over the roof of the waste material disposal building, which made it impossible for him to avoid. The alarm from the dosimeter he was wearing went off continuously. “I was desperate to finish my work as quickly as possible,” Mr. Okawa said. He worked two hours a day, starting on April 2, and after four days, his accumulated radiation dose had reached 16 millisieverts in total. Thinking back to those days, he said that given his annual radiation dose before the nuclear accident was two millisieverts at most, this was a terrible state of affairs.

Mr. Okawa spent about two years at the evacuation site set up in the school building, then moved to a temporary housing unit nearby. His home is located in the difficult-to-return zone in the town of Futaba, so there is no prospect of returning. As a resident who was forced to evacuate, and as a worker in the emergency conditions following the accident, he said flatly, “I don’t want to work at nuclear power plants anymore.”

It has now been five years since the disaster in Fukushima. On the grounds of the Fukushima No. 1 nuclear power plant, the work to reduce radiation levels has made headway. Paving over the contaminated top layer of earth with mortar has been realized in approximately 90% of the premises. Areas which still require that a full-face mask and protective clothing be worn now comprise only the areas around Units 1 to 4, and those areas have been reduced to around 10% of the whole plant. The average radiation dose of those who worked there this past February was 0.51 millisieverts, about one-ninth of the 4.76 millisieverts in April 2011 when Mr. Okawa was working at the site.

While the workers’ exposure to radiation has been reduced overall, the report that TEPCO submits to the Ministry of Health, Labour and Welfare at the end of each month nevertheless reveals the harsh reality involved in decommissioning the reactors.

According to the latest report, submitted at the end of March, 81 workers who worked at the Fukushima plant in February were exposed to radiation which exceeded 5 millisieverts a month. A certain number of workers are thus still being exposed to high levels of radiation. Meanwhile, the law prohibits workers from being exposed to an annual radiation dose of more than 50 millisieverts and a five-year dose of more than 100 millisieverts. The difference persists between the amount of exposure allowed by law and the actual limit of radiation doses experienced by plant workers.

From here, the decommissioning work will move to the central task of extracting the melted fuel debris from inside the reactors. The containment vessel which holds this debris contains very high levels of radiation, which means that remote operations involving robots will become more frequent. Mr. Okawa, who worked at several nuclear power plants over a period of many years, says that, even with the use of robots, there will always be the need for human involvement, too. He questions whether enough workers can be secured for this work in the future.

In the decommissioning of the reactors at the Fukushima No. 1 nuclear power plant, improvements in labor conditions have become an issue. The amount of additional allowance (“danger allowance”) paid to workers differs among subcontractors. If situations of this sort are not resolved, it is possible that the work to decommission the reactors, which is expected to take 30 to 40 years, may face a shrinking workforce. This concern could become even more crucial than worries over radiation exposure.

A 61-year-old worker, a resident of Iwaki, Fukushima Prefecture, said angrily, “Other workers get as much as 20,000 yen in danger allowance payments, while I get only 2,000 yen.” He works for a secondary subcontractor and is involved in paving work on the premises. The “danger allowance” that he refers to is an “estimated additional labor cost” that TEPCO pays to the original contractors as a work expense.

TEPCO has not openly publicized a danger allowance for each worker, but it says that it asked the original subcontractors to provide an additional allowance to their workers. When the worker from Iwaki asked his company about the allowance, the person in charge of wages replied that the money paid by TEPCO for this purpose was used to cover another project which had fallen short of funding.

At a counseling center for workers at the Fukushima plant, which was established by labor unions and NGOs in February 2015 in Iwaki, there are a large number of cases concerning danger allowances, the disparity in wages, and non-payments. Nobuo Akiba, the secretary of the center, said that many people come to Fukushima anticipating high wages. He explained that disappointed workers are reluctant to carry out their assignments and, when better-paying jobs increase in the Tokyo metropolitan area in connection with the Tokyo Olympics in 2020, most of them will choose these jobs instead.

There are also consultations at the counseling center related to long working hours and contractual problems. On the other hand, the number of consultations involving anxiety over radiation exposure is small, with only one such case arising to date.

Mr. Akiba believes that the problem of radiation exposure tends to be disregarded until a worker notices an abnormal change in his health, and that the worker’s main concern is earning a living rather than developing potential health problems in the future.

However, in a questionnaire regarding the working environment at the Fukushima No. 1 nuclear power plant, which is periodically pursued by TEPCO, anxiety involving “health effects from radiation exposure” still tops the list, though this concern has declined. In the most recent survey, released last November, 37.3% of workers indicated that they “Feel anxiety,” and 63.3% of the respondents listed “Radiation exposure” as the main reason for this anxiety.

Mr. Akiba stresses that there are no workers willing to take the initiative to engage in work which exposes them to radiation, and that TEPCO will eventually face serious troubles if workers’ concerns regarding things like wages and allowances are not adequately addressed.

Meanwhile, there is a difference between the allowances paid to workers involved in decontamination work at the nuclear power plant and workers involved in decontaminating residential houses in the difficult-to-return zone, even though both are at risk of being exposed to radiation. Because the decontamination work of residential houses is under the control of the government, the wages are paid directly by the government, and the workers receive a “special work allowance” (corresponding to a “danger allowance”) of 10,000 yen in full in addition to their daily allowance.

Condition of melted fuel must be fully grasped

According to the work process chart submitted by TEPCO, the decommissioning work at the Fukushima No. 1 nuclear power plant has reached the stage where fuel is removed from the spent nuclear fuel pool. At Unit 4, which was being checked regularly at the time of the accident, all fuel was removed by December 2014. At Units 1 to 3, the removal of debris from the reactor buildings and the disassembly of the reactor building covers is currently being carried out so that the spent nuclear fuel can be removed.

Along with the removal of the spent nuclear fuel, the fuel that melted down into the containment vessels of Units 1 to 3 must be analyzed. Grasping the condition of the molten nuclear fuel is the first step toward taking out the fuel debris, the most challenging process in the decommissioning work. Although the use of robots is expected, it is very likely that their electronic components will be damaged by high levels of radiation in the containment vessels. The International Research Institute for Nuclear Decommissioning (IRID) is now developing a robot arm that can be operated only with water pressure and springs.

With regard to the last step of removing the fuel debris, TEPCO plans to begin this work in 2021. From which reactors will it be removed and how exactly will this work be performed? There are now more questions than answers.