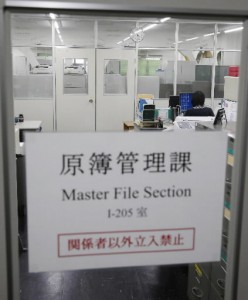 Can low-level exposure to radiation, of 100 millisieverts or less, increase the risk of developing cancer? The answer is not clear. The lack of clarity over this question is mentioned frequently in discussions regarding exposure to low-level radiation emitted from the nuclear accident at the Fukushima No. 1 (Daiichi) nuclear power plant, operated by the Tokyo Electric Power Company (TEPCO), and is based on reports and recommendations issued by international organizations. These reports and recommendations come mainly from data and analysis compiled by the Radiation Effects Research Foundation (RERF, located in Minami Ward, Hiroshima) in its epidemiological investigation of A-bomb survivors. In this series, the Chugoku Shimbun looks at the merits, and the limitations, of these research results, known as the “gold standard” of current knowledge in this area.

“There is virtually nothing to worry about. Even if a risk exists, it is very small,” says Kazuo Yoshida, the head of the Radiation Safety Research Center of the Central Research Institute of Electric Power Industry, located in Tokyo, regarding the risk from exposure to low-level radiation. Mr. Yoshida makes such statements in a DVD that TEPCO prepared and delivered to contractors with the aim of reducing the anxiety of workers involved in the decommissioning process of the reactors at the nuclear power plant in Fukushima.

In his explanation of the risks of radiation exposure, Mr. Yoshida cites data from RERF. From its investigation, which tracked the incidence of cancer in a total of around 120,000 people, including hibakusha (A-bomb survivors) and non-hibakusha (among them A-bomb survivors who were exposed to residual radiation after entering the city center soon after the atomic bombing), it is already known that the higher the level of radiation, the higher the risk of developing cancer. Mr. Yoshida also acknowledged that the effects of low-level radiation have yet to be clarified, and continued, “Even an investigation of 100,000 people cannot identify the effects of radiation because there are also other factors (such as smoking and drinking) that may cause cancer.”

The epidemiological investigation of exposure to radiation (other than radiation emitted by the A-bomb) is comprised of data collected from nuclear power plant workers at home and abroad and data from patients who have undergone computed tomography (CT) scans. The number of these workers and patients is almost the same as or more than that of A-bomb survivors. Why then is the data gathered from hibakusha considered to be substantially more important than the data collected from the power plant workers, most of whom were exposed to high levels of radiation?

Mr. Yoshida states that in the field of radiation protection, the data collected from A-bomb survivors serves as the baseline for everything. This is because, in the investigation of the power plant workers, there is an imbalance when it comes to age, gender, and lifestyle habits. On the other hand, in the atomic bombing, radiation was released over the heads of those living in Hiroshima at that time, regardless of age or gender. While inhumane, this did enable unparalleled data to be obtained for a wide distribution of ages and with a high accuracy for the estimated radiation dose.

The United Nations Scientific Committee on the Effects of Atomic Radiation (UNSCEAR, its secretariat located in Vienna) collects information concerning the effects of radiation on the human body from the world’s nations and verifies the health risks associated with exposure to radiation. In a public lecture held in Naka Ward, Hiroshima by RERF in November 2015, Malcom Crick, the secretary of UNSEAR and a guest speaker at the event, emphasized the importance of the data collected from hibakusha by saying that only the research conducted by RERF can be used for quantifying the health risks associated from radiation exposure.

Each time RERF releases its analysis reports, UNSCEAR cites RERF’s results in its radiation risk reports. Based on UNSCEAR’s reports, the International Commission on Radiological Protection (ICRP), an academic organization, then makes recommendations regarding the radiation exposure dose limit, and Japan and other countries establish their safety standards accordingly.

RERF is the only organization in the world that has tracked the lives of those exposed to the A-bomb radiation. This singular organization is now set to launch a new project that will seek to clarify the effects of low-level radiation on the human body.

RERF’s research on A-bomb survivors
The data which serves as the main basis for the international standard is the result of a “life span study” that investigates the cause of death and the incidence of cancer among a total of 120,000 people consisting of 94,000 hibakusha and 27,000 non-hibakusha (including A-bomb survivors who entered the city center soon after the bombing). In addition to the life span study, RERF conducts an “adult health study” every two years of some 25,000 life span study subjects, an “in-utero study” of about 3,600 persons who were exposed to the A-bomb radiation in utero, and a “study on second-generation survivors” consisting of about 77,000 persons.