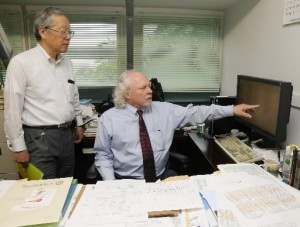 Since the 1950s, research pursued on A-bomb survivors by the Radiation Effects Research Foundation (RERF, located in Minami Ward, Hiroshima) has shed light on the relationship between radiation exposure and various diseases. RERF’s recent findings which revealed an increase in the risk of developing heart disease or stroke surprised researchers around the world who have traditionally focused on a more narrow range of diseases, such as cancers and cataracts. Otsura Niwa, the chairman of RERF, said with pride, “Our meticulous work in following up on the data has led to these findings.”

Until the 1970s, the lack of data that had been compiled made it difficult to even clearly confirm that the risk of developing cancer increases in a linear fashion in proportion to the level of radiation exposure. Between the late 1980s and 1990s, when the amount of data grew and there were advances in the field of statistics, RERF’s analysis improved in content and quality to the point where it began attracting the world’s attention.

However, with respect to exposure to low-level radiation, which has become a particular concern following the nuclear accident at the Fukushima No. 1 (Daiichi) nuclear power plant, run by the Tokyo Electric Power Company (TEPCO), the relationship between exposure and disease has not yet been clarified. Commenting on the difficulties involved in analyzing the effects of low-level radiation, Harry Cullings, the head of RERF’s Statistics Department, said the data contains a lot of “noise.” This “noise” refers to lifestyle habits like diet and smoking. The lower the level of radiation, the more difficult it is to identify the effects of exposure because this exposure is intertwined with various other factors.

To compensate for this inadequacy in the data, there is a need for working relationships with organizations specializing in molecular biology that study the mechanism of living organisms. Toward this end, RERF established a council together with several research institutions across Japan to study the effects of radiation. The council has held an epidemiology workshop for biologists each summer at RERF to bring together various fields of expertise and provide a venue for them to exchange views and ideas.

RERF also plans to establish a research cluster system in an attempt to overcome barriers between different areas of expertise. Under this system, specialists in statistics and researchers in clinical medicine will form a team to discuss new ideas. With regard to the issue of low-level exposure to radiation, the team members will explore ways of examining the influences of radiation exposure at lower levels.

Kazunori Kodama, RERF’s chief scientist who has worked for RERF since the era of the Atomic Bomb Casualty Commission (ABCC), the forerunner of RERF, is looking for contributions from young researchers and says that the success of RERF’s investigation into the relationship between low-level radiation and disease depends on their work compiling the data and pursuing future research.

In an epidemiological study, the amount of data increases as A-bomb survivors grow older and pass away, and as the number of cases expands, it becomes easier to find minute levels of radiation that will affect human health. “When we first published our research results about the relationship between radiation exposure and heart disease and stroke, we had a hard time getting others to view this research as reliable,” said Mr. Kodama. “If we now continue our research, the day will finally come when we can clearly indicate the effects of low-level radiation.”

Pride and sense of mission

RERF estimates that it will take roughly another 30 years to complete its work tracking all the A-bomb survivor subjects for its research. And when this research is complete, it will be able to state a lifetime risk of exposure to radiation.

Mr. Niwa, RERF’s chairperson, stressed, “Because our research is now viewed as highly reliable, we must present data that is extremely precise and accurate. This will be of benefit not only to the A-bomb survivors but also to the people of Fukushima.” The pride and sense of mission felt by the RERF team, in taking the lead in publishing data on radiation exposure, will help advance their research efforts.