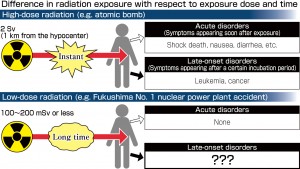 Gold standard: Research on differences between long-term exposure and instant exposure to radiation

The National Institute of Radiological Sciences (NIRS, located in Inage Ward, Chiba City) is Japan’s leading radiological research institute. In one corner of the institute premises stands the five-story “Low Dose Radiation Effects Research Building.” This building was erected in 2003 following the criticality accident at Tokaimura in Ibaraki Prefecture. The building contains a cesium irradiation device in its basement.

In 2012, one year after the nuclear accident at the Fukushima No. 1 (Daiichi) nuclear power plant, operated by the Tokyo Electric Power Company (TEPCO), experiments on exposure to l0w-dose radiation were begun in this building. The experiments involve exposing young mice, which are vulnerable to radiation, to low-level radiation for long periods of time, and analyzing the cause of death and the mortality rate.

The data that serves as the basis for current international standards for the risk of radiation exposure was compiled and released by the Radiation Effect Research Foundation (RERF, located in Minami Ward, Hiroshima). This data was obtained through research carried out on A-bomb survivors who were exposed to instantaneous high-dose radiation resulting from the explosion of the atomic bomb. What, then, are the effects of exposure to low-dose radiation in which this exposure occurs gradually, at lower levels, over a longer period of time? Shizuko Kakinuma, the head of NIRS’s Radiation Effects Research Department, stresses the significance of their work by saying, “The people of Fukushima are still fearful about their health and we hope that our research will help them.”

In the experiments with mice, some 10,000 mice represent developmental stages which correspond to the development of human infants, ranging in age from one to four weeks after birth. The mice are continuously exposed to different levels of radiation for four weeks and then bred. Obtaining the needed data from these experiments will take several more years. Yutaka Yamada, who leads the experiment team, said, “The lower the dose of radiation a young mouse was exposed to, the lower the risk of it developing cancer.”

To confirm that the results obtained from these experiments with mice will apply to human beings, the team is verifying whether this data is similar to the data collected by RERF from their research on A-bomb survivors. It has already been confirmed that a similar tendency exists in the risks of developing lung cancer and myeloid leukemia. There is some variation, though, when it comes to liver cancer in mice and humans, probably because many Japanese natives have the hepatitis virus.

Presuming that the data obtained from A-bomb survivors is important as a basis for setting standards, Mr. Yamada points out that in cases of radiation exposure like Fukushima, the test conditions and animal experiments must be pursued in such a way that only the influence of radiation can be observed.

The Radiation Safety Research Center of the Central Research Institute of Electric Power Industry (CRIEPI, located in Komae City, Tokyo) had been conducting research on low-dose exposure to radiation prior to the nuclear accident at the Fukushima nuclear power plant. In 2003, the center began an epidemiological study of some 170,000 subjects with researchers in Kerala, India, where natural radiation is many times higher than in other regions due to the mineral ore found in sand. No increase in the risk of developing cancer has yet been identified, so CRIEPI is continuing its research by expanding the pool of subjects to 370,000.

CRIEPI is also focused on biological research using mice cells. Kazuo Yoshida, head of the Radiation Safety Research Center, said, “An epidemiological study requires an enormous number of subjects and a tremendous amount of work. Based on changes in stem cells exposed to radiation, we hope to study defense mechanisms that have previously been outside the scope of our research.”