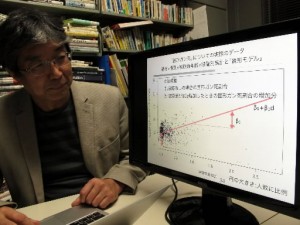 “The effects of exposure to radiation of 100 millisieverts or less can be obtained from the research data involving A-bombed survivors,” said Yutaka Hamaoka, a professor of marketing science in the Faculty of Business and Commerce at Keio University, without hesitation. Following the nuclear accident at the Fukushima No. 1 (Daiichi) nuclear power plant, Professor Hamaoka launched his own investigation into the effects of exposure to low-level radiation, though he is not an expert in the field.

That the effects of exposure to low-level radiation cannot yet be clearly articulated in the international standards is a matter linked to the data and analysis pursued by the Radiation Effects Research Foundation (RERF, located in Minami Ward, Hiroshima) involving some 120,000 A-bomb survivors. In its research, RERF has divided the survivors into several groups in line with their estimated levels of radiation exposure and analyzed the relationship between these levels of exposure and the development of cancer and other diseases.

Professor Hamaoka is from the town of Kumano in Hiroshima Prefecture. Learning that some of the research data involving A-bomb survivors he is familiar with is being used as the basis for discussing exposure to low-level radiation, he became more keenly interested in this issue. When he checked available data, he was surprised to find that the analysis was made using a method not found in the field of marketing.

In studying consumer behavior, personal data that is entered into cash registers at stores throughout Japan is compiled and used for analysis. The number of samples exceeds one million people. Professor Hamaoka said, “Individual data is important for analyzing the effects of radiation. If that data is grouped and rounded, there is the possibility that no effect can be seen.”

His convictions grew stronger after he reanalyzed the results of the epidemiological investigation carried out on workers at nuclear power facilities in the United States, in which all anonymous personal data is openly available to the public. According to the official investigation results, in which radiation doses are grouped, exposure doses between 17 and 32 millisieverts have no effects on human health. Professor Hamaoka’s own analysis, however, revealed that radiation exposure at these levels does effect human health by raising the risk of developing cancer and other diseases.

RERF explains that grouping individual radiation exposure doses is done because the data must be adjusted according to the age when the A-bomb survivors were exposed to the atomic bomb, the age when they were diagnosed with cancer, and lifestyle habits such as smoking. Harry Cullings, the head of RERF’s Department of Statistics, said that carrying out complicated calculations simultaneously requires a super computer, but as the data collected from the survivors is personal information, it cannot be taken off the premises to outsource the calculation work.

The data from the A-bomb survivors can only be made accessible to persons who have been approved by RERF to participate in joint research. Professor Hamaoka said, “If the names of the survivors are made anonymous, it should be possible to make this data public. There should be efforts to ensure that the data is shared among many researchers.”

In the field of radiation biophysics, there is also demand for sharing RERF’s special resources. David Brenner, the director of the Columbia University Center for Radiological Research, pointed to the blood samples preserved by RERF, and said, “Studying tissue samples would allow us to understand how the body has processed the damage produced by low-level radiation exposure.” He went on to say that if this data from the A-bomb survivors could become widely available to researchers and institutes in the United States and Europe, it would allow for many different types of advanced studies which cannot at present be pursued by Japanese researchers.

RERF exercises strict management of the A-bomb survivors’ data out of consideration for their personal feelings. Mr. Brenner expressed understanding of the survivors’ sentiments and said that since they have cooperated with RERF’s research in permitting use of their bodies, there may also be some survivors who would allow their biological samples to contribute to a better scientific understanding of the risks of low-level radiation.