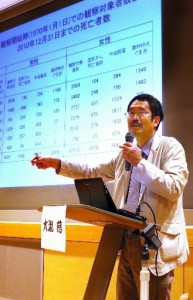 Gold standard: Effects of radiation are not explained only by A-bomb’s flash

“The effects of radiation exposure cannot be fully explained only by ‘pika’ (the flash of the atomic bomb), and the effects of ‘don’ (the blast of the atomic bomb) appear to have been bigger than originally thought,” said Megu Otaki, a professor emeritus of biometrics at Hiroshima University, at a meeting held by a peace group on May 22 in Naka Ward, Hiroshima. Professor Otaki was a guest speaker at the meeting.

“Pika” is the Japanese term for the flash produced by the atomic bomb 71 years ago at the moment it detonated. A massive amount of initial radiation was released in this instant. “Don” refers to the tremendous blast and shockwave produced by the atomic bomb. A cloud of dust and dirt containing radiation rose into the air, dispersing radioactive particles. “Even if the amount is very small, people are eventually exposed to radiation locally when they take in these dust and dirt particles through breathing, drinking, and eating, and they become attached to places inside the body. So our view of radiation exposure levels should be revised,” said Professor Otaki, discussing the effects of internal exposure to radiation.

The data on A-bombed survivors that has been compiled by the Radiation Effects Research Foundation (RERF, located in Minami Ward, Hiroshima) is based on the dose of instantaneous external exposure to radiation. According to RERF, there are no scientific grounds which support the notion that internal exposure to radiation is particularly dangerous, and the effects of residual radiation are believed to be too small for consideration. Therefore, neither the experiences of the survivors who moved through the city while inhaling dust and dirt from the atomic bomb nor the effects of residual radiation were taken into account in RERF’s investigations.

In response to RERF’s view, Professor Otaki, who pursued research at Hiroshima University’s Research Institute for Radiation Biology and Medicine (RIRBM) over many years, contends that the real effects caused by the atomic bomb were ignored in the research undertaken by RERF.

Among those who entered the city soon after the atomic bombing, there were many who suffered from diarrhea, hair loss, and other acute symptoms of radiation sickness. After he learned of a large-scale investigation carried out by Hiroshima doctors in the 1950s, Professor Otaki’s concern over the effects of exposure to low-level radiation grew.

In addition, the results of a joint research project which followed the health of the A-bomb survivors who entered the city soon after the atomic bombing, its database held at RIRBM, showed that men in their 30s who entered the two-kilometer area around the hypocenter within three days of the bombing, and particularly those who entered this area on the day of the bombing, clearly have a higher risk of dying from solid cancers. This fact cannot be explained by RERF’s data analysis.

Imbalance in range of research subjects

Professor Otaki believes that the substantial amount of metal found in the clay walls of homes and in the ground was exposed to the initial burst of radiation from the atomic bomb and transformed into radioactive materials with short half-lives. This radioactivity was then absorbed by the bodies of those who entered the city to help with relief efforts or to search for family members. Professor Otaki said, “Five years have passed since the nuclear accident at the power plant in Fukushima. We have to take into account the effects of the atomic bombing so we can address the health problems of the people of Fukushima more effectively.”

With respect to RERF’s research on A-bomb survivors, there have been involved discussions which highlight the imbalance in the range of subjects used in these studies.

Because RERF began its investigations of A-bomb survivors in the 1950s, its data does not include those who died within five years of the bombing. Steve Wing, an epidemiologist and an associate professor at the University of North Carolina at Chapel Hill, described the survivors in this way: A-bomb survivors are a group of people who have, in a sense, a strong vital force because they managed to survive the harsh conditions after the atomic bombing even though they were exposed to high doses of radiation. Mr. Wing said that, in both Japan and the United States, there is the possibility that the risks to human health have been underestimated. He is also a member of a third-party committee that RERF has formed to conduct follow-up surveys on second-generation A-bomb survivors.

The term “gold standard” does not necessarily mean complete perfection. Facing the limits inherent in science is the first step in unraveling the effects of radiation and clarifying their true impact.